Exonerees to Speak after Performance of “The Exonerated” 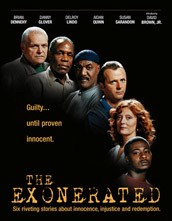 Playing for two nights at Pennsylvania’s Allentown Public Theatre this weekend is a production of “The Exonerated,” the hit play by Jessica Blank and Erik Jensen in which the true stories of six people sentenced to death for crimes they didn’t commit are told in their own words.
The play will run on July 27 and July 28 at 8pm as part of Allentown Public Theatre’s Actors in Action Festival at America on Wheels Museum.
Vincent Moto, who served nearly nine years in a Pennsylvania prison for a crime DNA proved he didn’t commit, will answer questions after the performance on Friday, and Kirk Bloodsworth, who served eight years before becoming the first person to be exonerated from death row through post-conviction DNA testing, will answer questions after the performance on Saturday.
Pennsylvania Innocence Project Legal Director, Marissa Boyers Bluestine will be available for questions after both performances.
Visit the Allentown Public Theatre

for more details.
For more about the