“I want people to understand that this is serious." 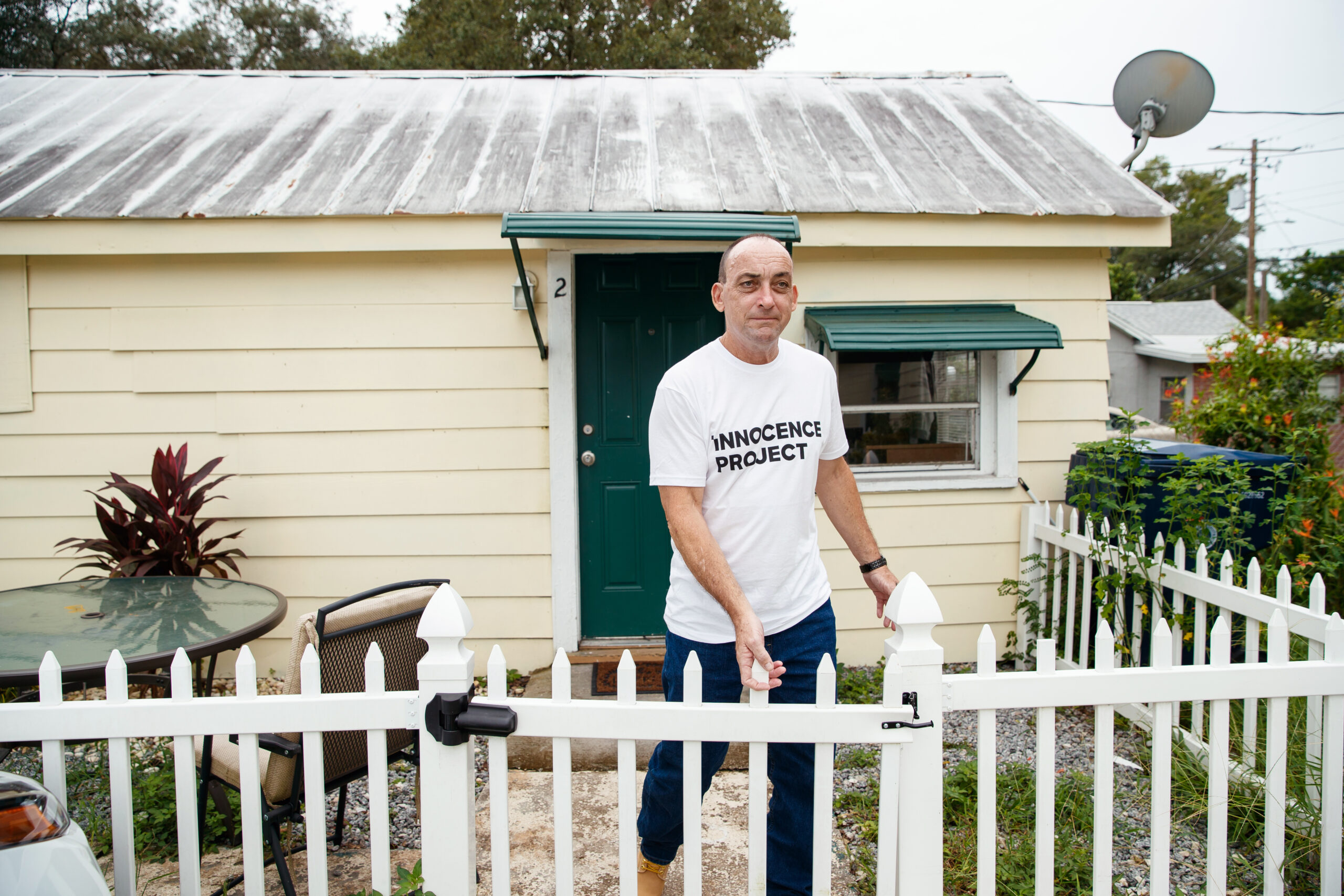 Robert DuBoise, 59, was officially exonerated from all charges in the 1983 rape and murder of a young woman after serving nearly 37 years in prison on Sept. 14, 2020, in Tampa, Florida. (Image: Casey Brooke Lawson/The Innocence Project)

Robert DuBoise woke up early on the morning of Oct. 19, so he could get to his polling station in Hillsborough County, Florida, as soon as it opened at 7 a.m.

“I voted first thing in the morning, I made sure. I didn’t want to hesitate for a minute,” said Mr. DuBoise. “It was the first day I voted ever in my life and it felt really good.”

Mr. DuBoise had just reached voting age, 18, when he was arrested for the rape and murder of a 19-year-old woman in Tampa, Florida, in 1983. He maintained his innocence, but was convicted based on the testimony of an unreliable jailhouse informant and the use of bite mark analysis, a type of pseudoscience that has been discredited. The jury that convicted him recommended a life sentence, but the judge chose to sentence him to death. Mr. DuBoise, then still a young man, spent three years on death row before the Florida Supreme Court vacated his death sentence and re-sentenced him to life.

For over 36 years, Mr. DuBoise languished in prison for a crime he did not commit, until this year, when DNA testing of crime scene evidence that was previously thought to have been destroyed excluded him as the attacker. He was released in August and officially exonerated on Sept. 14. 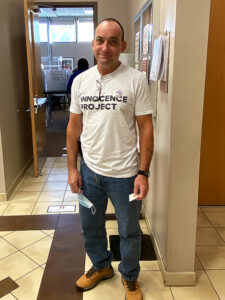 Robert DuBoise after casting his ballot in 2020 General Election in Florida. (Image: Courtesy of Robert DuBoise)

“My priority in those first couple of weeks after I came out [of prison] was to get my driver’s license and register to vote. I did both at the same time within maybe 10 or 11 days of being free,” he said.

Growing up, Mr. DuBoise bonded with his father by watching the news and discussing politics. So the importance of voting was never lost on him and he was looking forward to exercising his right, before it was taken from him by wrongful incarceration. But his experience navigating the legal system and fighting to prove his innocence has given him a unique perspective on just how much voting in elections — particularly local elections — can affect people’s lives.

While many voters are galvanized to vote in presidential elections, Mr. DuBoise said it’s actually the vote he casts in his local elections that he believes will have the most impact.

“A lot of people don’t realize that you get to vote for your local prosecutor, and I want people to understand that this is serious,” Mr. DuBoise said. Currently, prosecutors are elected in 45 states, including Florida.

Prosecutors wield enormous power to both convict someone and to prevent wrongful conviction. They have wide discretion within the system to bring charges against someone and to choose to drop charges.

“I want people to understand that this is serious.”

“If prosecutors thoroughly scrutinize cases the police bring them and conclude that there’s not compelling or reliable evidence, then they have near-absolute authority to drop the charges — and prevent wrongful convictions before they occur,” said Nina Morrison, Senior Litigation Counsel at the Innocence Project.

“And we’ve seen the incredible powers that prosecutors have to undo wrongful convictions over the last 28 years at the Innocence Project,” she added.

It’s prosecutors that decide who will be prosecuted, what to charge them with, and what kinds of evidence they’ll offer in court to convict a person. Prosecutors also oversee the plea bargaining process. The Justice Department estimates as many as 95% of cases end in a guilty plea — meaning they never actually go to trial. But not everyone who takes a guilty plea is actually guilty. Nearly 1 in 5 known exonerees pleaded guilty to crimes they didn’t commit, according to the National Registry of Exonerations.

Why Do Innocent People Plead Guilty to Crimes They Didn't Commit?

Why Do Innocent People Plead Guilty to Crimes They Didn't Commit?

State and local prosecutors also have the authority to grant access to DNA evidence without a court order and to allow attorneys to access crucial files that can help them investigate their clients’ cases. And, a statement in court from a prosecutor that a wrongful conviction has occurred and that the wrong person is in prison — as was the case for Mr. DuBoise — can all but ensure that conviction is overturned, Ms. Morrison explained.

“And yet so few people show up to vote for prosecutors, even though that is the office that often has the most day-to-day impact on a community,” she said.

Low voting rates like these in local elections mean that a minority of voters are responsible for choosing some of the most powerful positions in their county and justice system. This is especially true in local elections that don’t coincide with larger elections, like the presidential election.

On average, 54% of the eligible voting population voted in the last 10 presidential elections, according to the American Presidency Project. That’s a relatively low rate compared to most developed democracies, the Pew Research Center reported. But the rate is even lower for midterm elections. About one-quarter of eligible voters participate in local and municipal elections. At times, that rate has dipped even lower, particularly in “off” years when no federal candidates are on the ballot — for example, just 12% of eligible voters in Philadelphia voted in the city’s district attorney race in 2013.

“Having had firsthand experience in the system, I know how important it is for people to vote. Some people don’t recognize the significance of their vote — they think it’s just one vote and it won’t really matter — but when you hear of an election being won by just a few votes, it could have been your vote that made a difference,” Mr. DuBoise said.

About one-quarter of eligible voters participate in local and municipal elections.

Such was the case in the district attorney race in New York City’s Queens borough in 2019, in which the decisive primary election was won by a margin of just 60 votes.

Most prosecutors are elected for a city or a county to serve either a four- or six-year term, meaning the opportunity to hold them accountable at the polls doesn’t come around that often.

“So it’s critical that people turn up to vote and we really encourage people to research their local prosecutor candidates. Find out where they stand on issues that matter to you. And exercise the power of the vote to choose someone to hold that enormous responsibility whose values and priorities you trust,” Ms. Morrison said.

She added that even though election day is close and the COVID-19 pandemic prevents large, in-person townhalls, virtual town halls are a great way to ask candidates questions about the things that matter to you — like what crimes will they choose to prosecute and do they have a process in place for evaluating and correcting wrongful convictions?

But voting is only one tool to hold a prosecutor accountable. Beyond election season, the public can hold elected prosecutors accountable by asking about the progress they’ve made on their campaign promises at community meetings or joining a “court watch” program to attend a court proceeding.

Mr. DuBoise said he’s proud to have voted for the first time this year, particularly in Florida, where about 10% of the population, including Mr. DuBoise, were previously prohibited from voting because of felony convictions. In 2018, the state passed an amendment allowing people with felony convictions who had completed their parole or probation to vote; however, a more recent policy requiring formerly incarcerated people to pay prison fines, fees, and restitution before being allowed to vote has made it difficult for many individuals to be able to actually exercise their right to vote in this election.

“People who can vote should vote to represent those who can’t vote, like those who are incarcerated. You can vote for the governor, who is the person that appoints the head of the department of corrections. And that person has the power to change what daily life in prison is like. And you also get to vote for judges,” Mr. DuBoise said.

“So it’s our duty to vote to try to make the system better.”

Not sure where your polling site is? Check here.