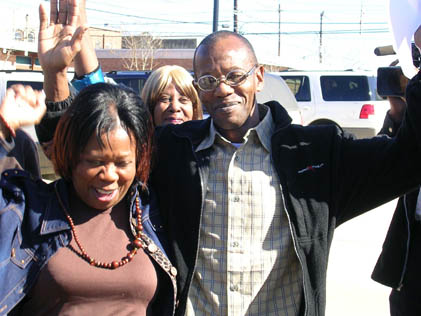 Saturday marks the fourth anniversary of Rickie Johnson’s exoneration from Angola State Penitentiary in Louisiana. Johnson spent a quarter century there on a rape conviction that was based largely on an eyewitness misidentification. On January 14, 2008, with the help of the Innocence Project and DNA tests proving his innocence, he walked out a free man.

Johnson has since become a proud grandfather, an entrepreneur and an advocate for the wrongfully convicted. On the first anniversary of his exoneration, he opened RJ Leather Shop in Leesville, Louisiana. He has recently expanded the shop to include car and motorcycle upholstery in addition to leatherwork like wallets, belts and jackets.

“I’m still trying to get myself established, financially,” he says. “I’m not going to complain because there’s some people in even worse shape than I am.”

“I’ll be back at the capital in a few months to speak with legislators again. I want to make sure that the exonerees coming out now don’t have to work as hard as I did. I’m looking out for the future, not the past.”

Watch a video interview of Johnson

to see if your state has a compensation law.