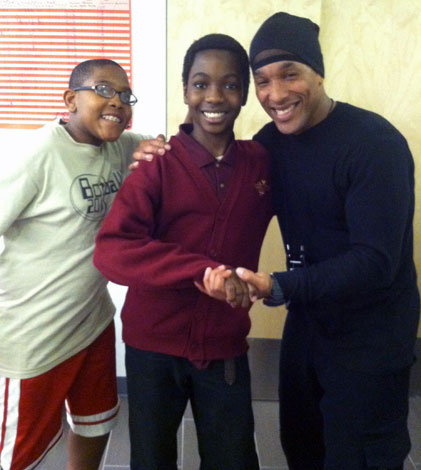 
Today marks the 10th anniversary of the day that five men—

—known as the “Central Park Five,” were exonerated through DNA testing. They had been wrongfully convicted of raping and assaulting a female jogger in Central Park on April 19, 1989 based on their false and coerced confessions.

The Central Park Five, a Ken Burns’ documentary about the wrongful conviction, and the book that it is based on, have revitalized interest in the case and shed light on the hardship that the co-defendants and their families have endured. Since the film’s release in November, the exonerees have been traveling and speaking publicly about their story.

The Harlem-based youth center Street Squash recently invited Wise to come and speak to middle school age boys involved in its after school program. Looking around the room, Wise was couldn’t help but notice that the boys were just a little younger than he had been when the crime occurred. Wise and his co-defendants were teenagers at the time, between the ages of 14 and 16. Because Wise was the oldest, he received the harshest sentence, serving over 11 years in a maximum-security facility before his release. He is now 40 years old. “I’m glad to be alive to see my young brothers,” he greeted the boys.

When they asked why he falsely confessed, he explained that for seasoned detectives, getting a confession out of a young, inexperienced boy like him was like “taking candy from a baby.” Looking around the room, he cautioned, “I don’t want to see this repeated.”

about the Central Park Five case

Other exoneration anniversaries this week: