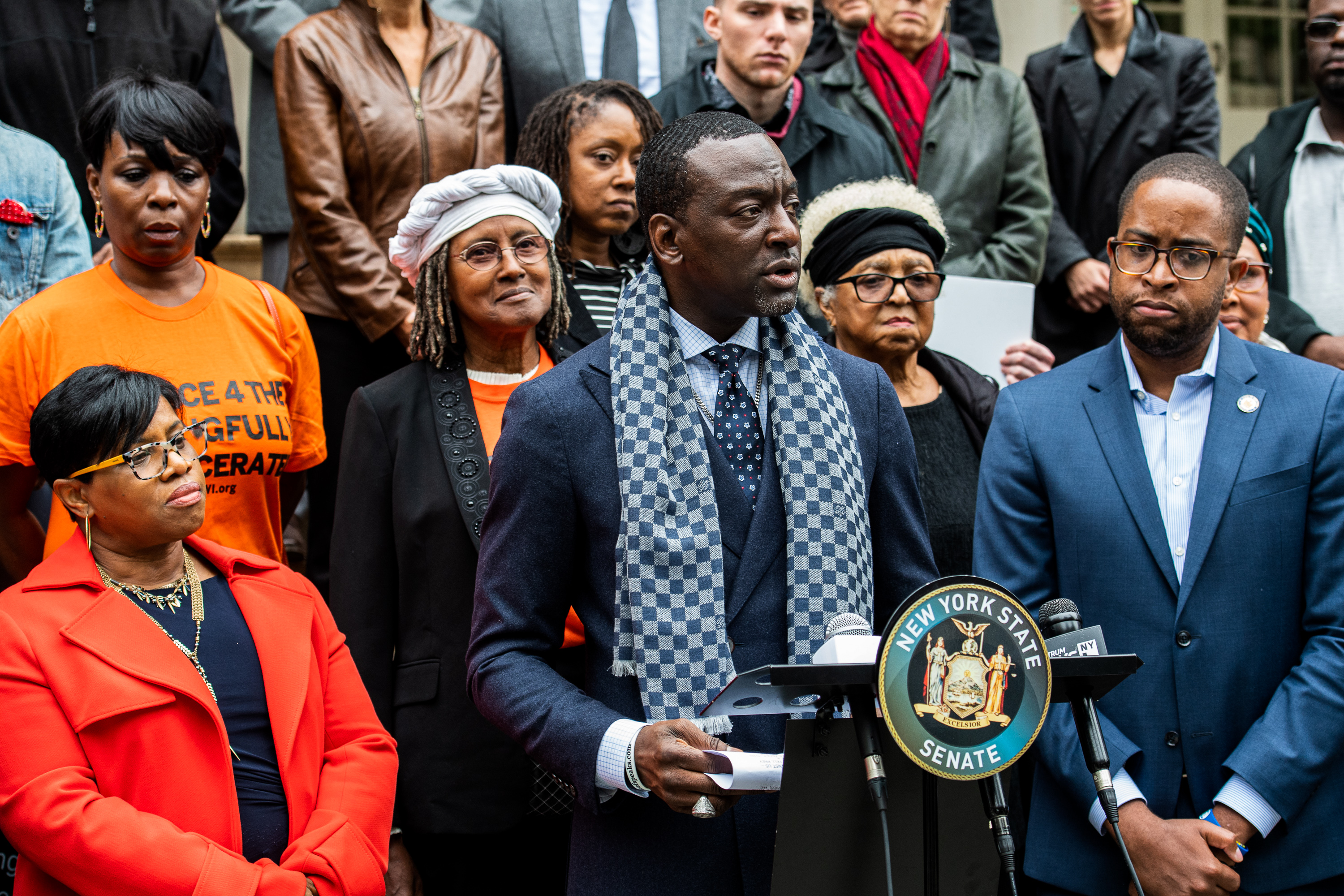 (New York – October 29, 2019) – Three members of the Exonerated Five — Yusef Salaam, Kevin Richardson and Korey Wise — joined Yusef’s mother, Sharonne Salaam, members of the New York State Senate and Assembly, the Innocence Project, the Legal Aid Society and the New York State Association of Criminal Defense Lawyers to unveil a package of criminal justice reforms that could serve as a national model for much-needed change across the country.

“Nearly 30 years ago, we were imprisoned for a brutal crime we did not commit, and collectively spent the better part of five decades behind bars for it,” said Yusef Salaam and Kevin Richardson in a joint statement. “At the heart of the circumstances that conspired to strip us of our freedom and forever change the trajectory of our lives were false confessions. The police obtained these false confessions by using deception and feeding us false information throughout the course of the interrogations. To this day, these techniques and practices are still used by the police. It is unconscionable that these practices are allowed to persist, and we commend Senator Myrie for pursuing a proposal that would outlaw these practices for once and for all. We also commend Senator Bailey and Assemblywoman Joyner for pursuing legislation that would require the appointment of counsel to juveniles during interrogations.

“In the coming months, we will intensely lobby the state legislature and the governor to enact these common sense reforms before the end of the coming legislative session. Our state can no longer live with the fact that these techniques can be used to coerce false confessions from people. We will fight to ensure a tragedy like ours will never happen in this state again.” 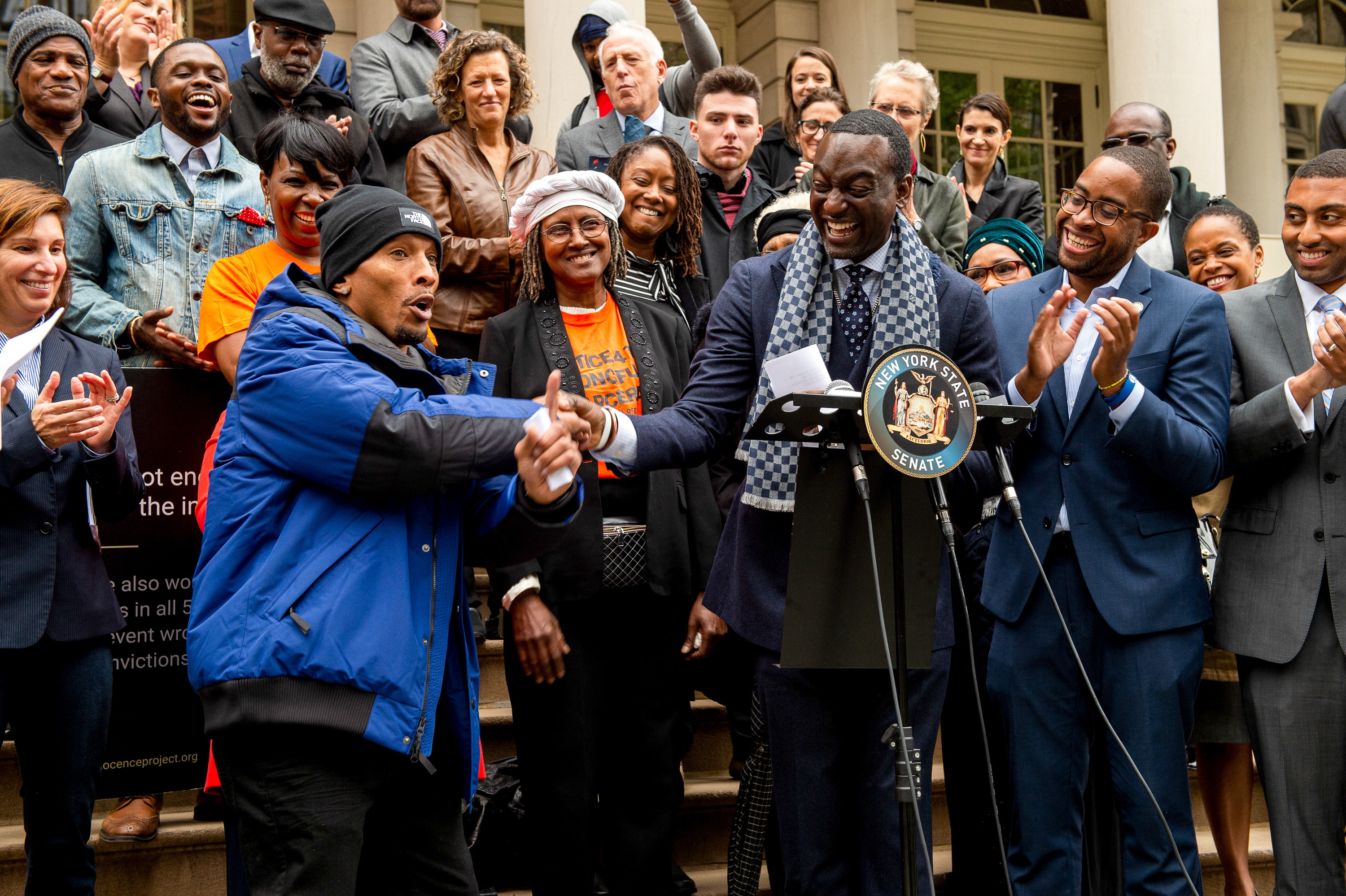 The proposed bills include:

“New York has produced 43 wrongful convictions predicated on false confessions because of the unscientific interrogation methods and a statute that allows courts to only consider the voluntariness – and not the accuracy — of a confession before it is admitted into evidence,” said Rebecca Brown, director of policy at the Innocence Project. “This package of reforms includes legislation that at long last would change that, banning deception in interrogation rooms and for the first time requiring assessments of reliability of confession evidence in New York courtrooms. The Exonerated Five and the other 38 people across the state who fell prey to a broken system deserve no less.

Sharonne Salaam, mother of Yusef Salaam and criminal justice advocate, Justice 4 the Wrongfully Incarcerated: “It is high time that exonerated men and women and their family members receive the monetary compensation, lost wages, medical and educational assistance and child support reimbursement they so deeply deserve. I have been personally lobbying for this bill for years, and it is my strong hope that at long last Albany hears our call and does the right thing for those who had decades of their lives stolen from them.” 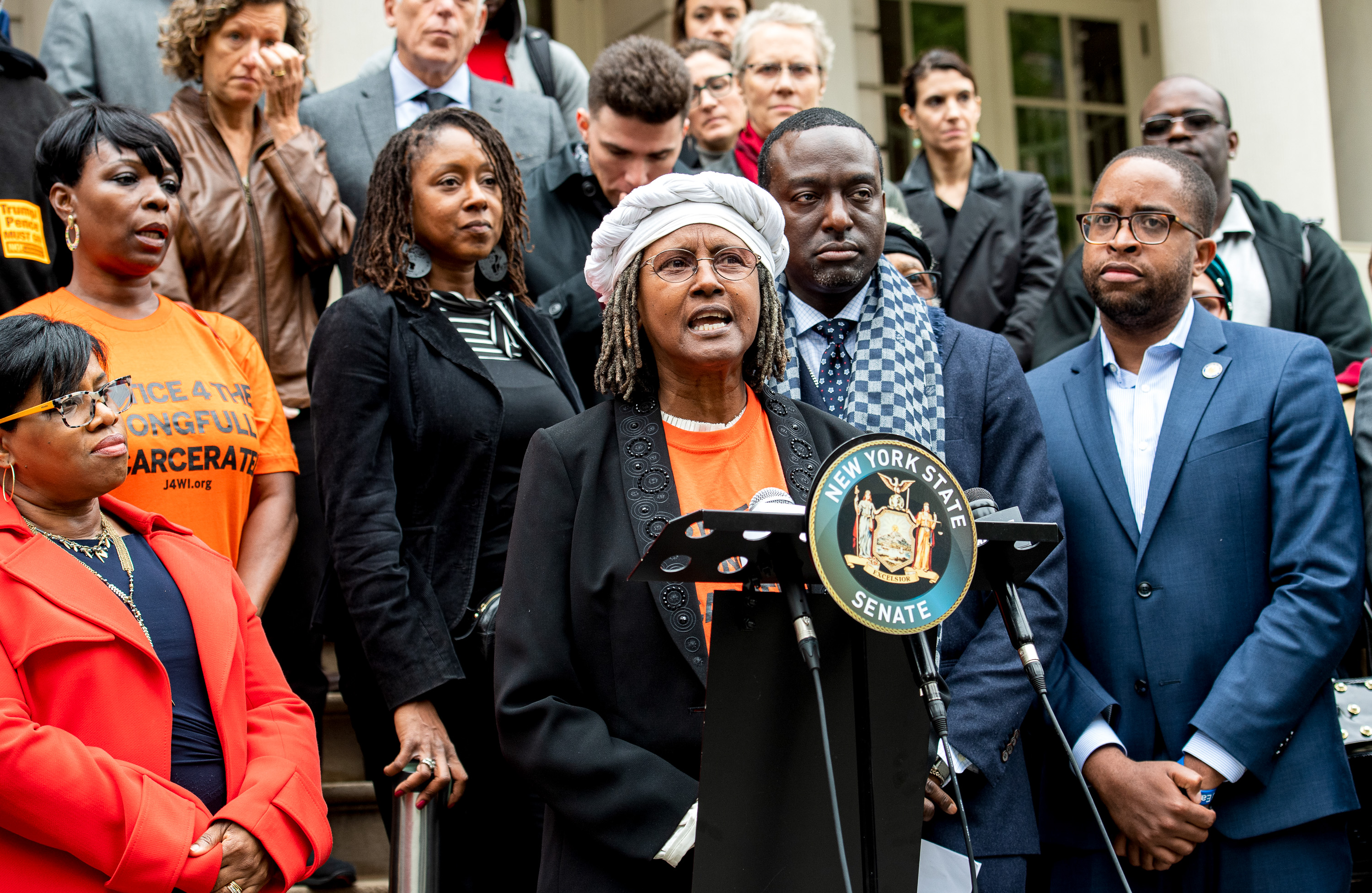 Dawne Mitchell, attorney-in-charge of the Juvenile Rights Practice, The Legal Aid Society: “This legislation makes crucial changes to the Family Court Act to protect our clients’ rights from law enforcement abuses. If enacted, law enforcement will be prohibited from interrogating a child until a parent or guardian is notified and it also ensures that our juvenile clients consult with counsel before law enforcement accepts any Miranda Rights waiver. The Legal Aid Society thanks Senator Jamaal Bailey and Assembly Member Latoya Joyner for sponsoring this legislation and we urge Albany to enact these reforms next session immediately.”

Terri Rosenblatt, supervising attorney of the DNA Unit, The Legal Aid Society: “New York City’s rogue DNA index threatens the privacy of countless New Yorkers, particularly those from over-policed communities of color who are subjected to genetic stop-and-frisk by the NYPD. We urge the legislature to enact S6009/A7818, which brings much needed clarification to the state DNA law and ends unregulated, unaccountable and unreliable DNA databanks once and for all.”

Lori Cohen, president, New York State Association of Criminal Defense Lawyers: “In the last legislative session, the NYS legislature took steps to make the criminal justice system more fair for all through discovery and bail reform. These new proposed reforms continue that trajectory by further protecting the presumption of innocence and seeking to provide protections when they are most necessary.”

NY State Senator Zellnor Myrie: “One of the most important reasons the Exonerated Five were coerced into falsely confessing to crimes they did not commit was because police deliberately obfuscated the truth during their interrogations. Their deceptive techniques contributed to the city robbing these innocent men of decades of their lives. That these techniques have been permissible until now is a disgrace. But today, we are taking action to ensure that this never happens again. Today, standing with allies in the Innocence Project, Legal Aid and NYSACDL, and fighting together with Mr. Salaam, Mr. Richardson and Mr. Wise, we will change this policy in Albany so that no New Yorker is ever locked up due to dishonest police interrogations.”

NY State Senator Jamaal Bailey: “Over 30 years ago, one of the great injustices of our lifetimes was perpetrated against the Exonerated Five in this state. Decades were needlessly robbed from these young mens’ lives. Their families were torn apart forever and the damage may never be undone. Sadly, these young men were far from the only people who were railroaded into confessing to crimes they did not commit. Many reasons contribute to false confessions by minors, but one of the most alarming is that, unlike adults, minors do not have the right to counsel in the state of New York. Along with assembly member Latoya Joyner, our bill would ensure minors now have that right. Had the Exonerated Five had a right to counsel, their lives may be different today. For the many young people who get accused of crimes they did not commit, this law could change their lives as well. For this reason, we’ll fight with our partners, advocates and members of the exonerated five in Albany next year until this is done.”

NY State Senator Brian Benjamin: “Few people know that after the Exonerated Five were freed from being wrongfully imprisoned that it took New York City over a decade to settle the lawsuit three of the men had filed. For the men and women who have their rights and justice restored after a wrongful conviction, restitution and rehabilitative services shouldn’t be treated as a privilege, they should be treated as a right. The bill I’ve sponsored with assembly member Aubry streamlines services for those who were wrongfully convicted, and provides for larger compensation and a swifter path to obtaining that compensation. It’s a stain on our collective soul that any human is made to go to prison for a crime he or she did not commit. It’s the least we could do to ensure those who were wrongfully convicted have as smooth a path possible when they re enter society.”

NY State Senator Brad Hoylman: “New York City stores the personal genetic information of more than 80,000 New Yorkers — tens of thousands of whom have never been convicted of a crime — in a rogue, unregulated DNA index. This practice is a brazen and unlawful violation of New Yorkers’ privacy, with no way of knowing how many of those thousands of profiles are from children or people targeted based on the color of their skin. It’s time to end New York City’s rogue DNA index once and for all, which is why I’m proud to be working with assembly member Tremaine Wright on legislation that will prohibit New York City from maintaining this rogue databank.”

NY State Assemblywoman Latoya Joyner: “In the nearly 30 years since the injustice of the Central Park 5 occurred,little has changed in our criminal justice system. Instead, political inertia and a loss of urgency have left our criminal justice system open to a repeat of the same horrible events that took place decades ago and the scales of justice continue to lean toward injustice – particularly when it comes to young men of color. That is why I have introduced the Justice for All Youth Act, which requires that an attorney be present before a youth is interrogated and throughout a law enforcement interrogation. This legislation recognizes that our criminal justice system can no longer be built upon the exploitation of youth in pursuit of outcomes that are unjust and ultimately punish the innocent for crimes they did not commit. And it does so by making sure that young people aren’t forced to waive their Miranda Rights without fully understanding just what that means.”

The Legal Aid Society exists for one simple yet powerful reason: to ensure that New Yorkers are not denied their right to equal justice because of poverty. For over 140 years, we have protected, defended, and advocated for those who have struggled in silence for far too long. Every day, in every borough, The Legal Aid Society changes the lives of our clients and helps improve our communities. https://www.legalaidnyc.org