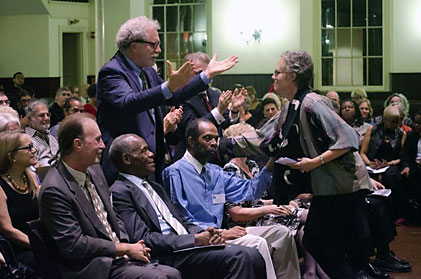 
On October 8, 2013, Innocence Project Executive Director Maddy deLone was honored by Witness to Innocence at its 10th Anniversary Celebration in Philadelphia, Pennsylvania. She and other special guests were recognized for their dedicated activism to reform the criminal justice system.

The evening also paid special recognition to Co-Founder of Witness to Innocence and death row exoneree, Ray Krone. According to Witness to Innocence, over the last decade, Ray Krone has “enabled the organization to thrive into one of the powerful anti-death penalty organizations in the United States. . . . To this day Ray remains committed to ending the death penalty and challenging gross injustice as Director of Membership and Training and an avid speaker.”

Originally established under the sponsorship of Nobel Prize nominee, Sister Helen Prejean, Witness to Innocence strives to empower “exonerated death row survivors to be the most powerful and effective voice in the struggle to end the death penalty in the United States, ” according to its website. It is the only organization of its kind in the United States.

For more information about Witness to Innocence: