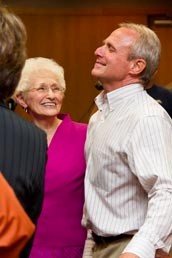 Al Reinert, a two-time Academy Award nominee, recently began filming a documentary focusing on the trials and travails of Michael Morton, who was exonerated after 25 years of wrongful imprisonment for allegedly murdering his wife.  DNA evidence implicated the real perpetrator.

Reinert began filming the documentary in the same Georgetown courtroom where Morton was convicted in 1987. Morton’s trial lawyer, William Allison; John Raley, one of the leading lawyers for his exoneration, and two jurors from Morton’s 1987 trial have been interviewed. Reinert hopes to use the documentary to capture Morton’s emotional ordeal during his 25 years in prison and his exoneration.

“At the heart of this story is the 25 years he lost through no fault of his own and you’ve got to feel those 25 years.  There’s no easy way to do it,” Reinert said.  “It’s a great story in real life, and if we don’t screw it up, it’s going to be a great movie.”

The documentary could potentially be included the Sundance Film Festival in January.