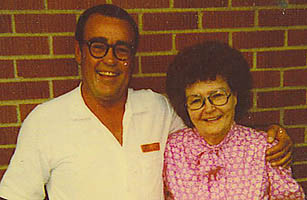 DNA testing obtained by the Innocence Project and partner organizations has proven that a Texas man was executed in 2000 based on false evidence. Claude Jones, above with his mother, always maintained his innocence of the murder for that led to his execution.   The new test results prove that a hair allegedly tying him to the crime scene was not his.

Innocence Project Co-Director Barry Scheck called the case “another disturbing example of a miscarriage of justice in Texas capital murder prosecutions.” Before Jones was executed in 2000, he requested a 30-day stay from then-Governor George W. Bush so he could seek DNA testing on a hair that allegedly tied him to the scene of a robbery and shooting. Bush was awaiting  a decision from the Florida Supreme Court on whether the recount in the presidential election could continue.

Although Bush had previously said DNA testing should be conducted when “it can be relevant as to the guilt or innocence of a person on death row,”  the memo to Bush about the case from the General Counsel’s office recommended against the stay and failed to mention that Jones was seeking DNA tests. Bush denied the stay, and Jones was executed on December 7, 2000.

Read more about the case in today’s Innocence Press release

Get key documents, a case timeline and more in

Media coverage of the case: