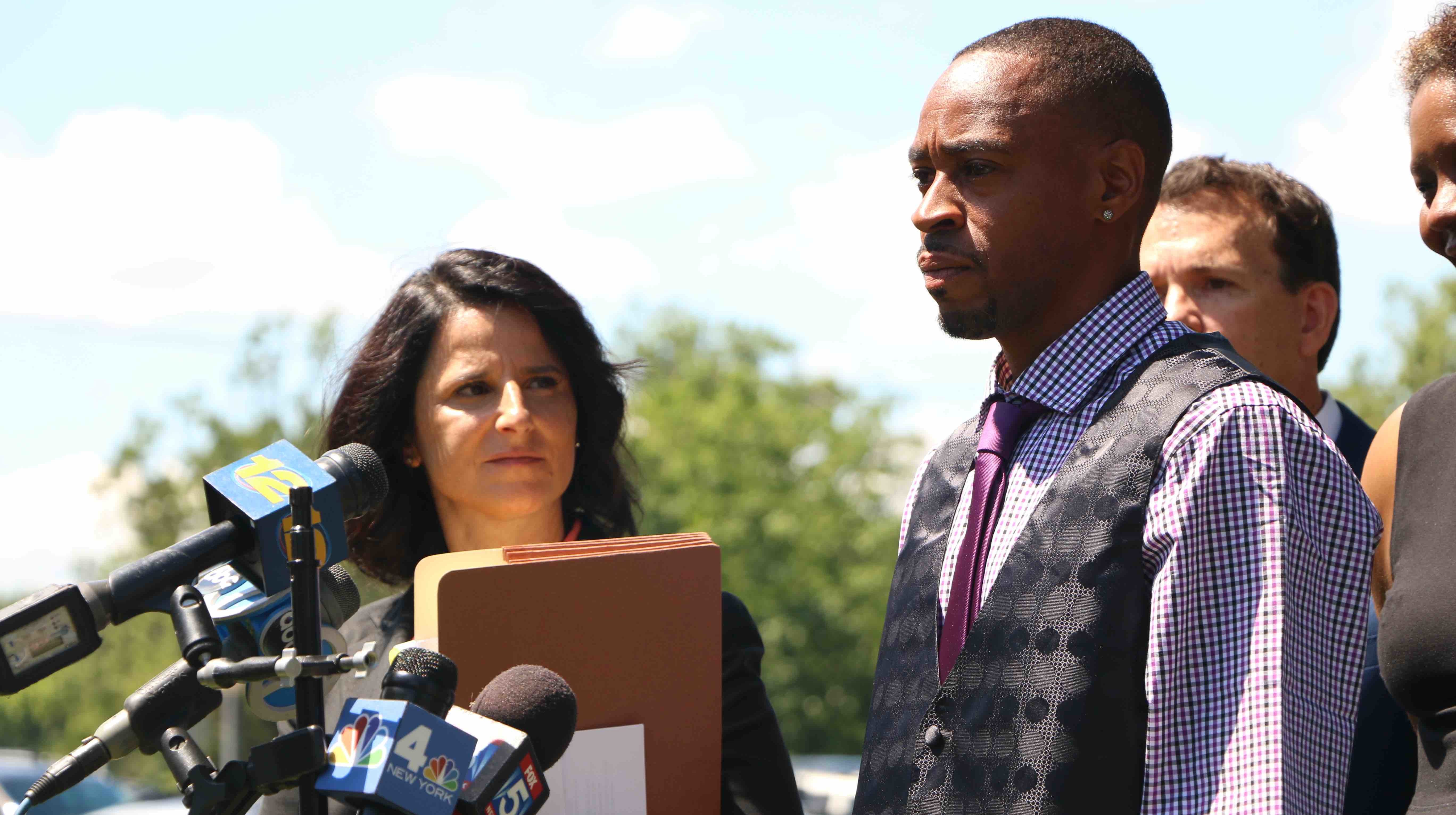 Dion Harrell speaks out after his exoneration on August 2, 2016 in New Jersey (Photo by Yili Liu).

(New York, NY – August 3, 2016) With the consent of the Monmouth County Prosecutor’s Office, a New Jersey court today vacated the 1988 rape conviction of Dion Harrell based on new DNA evidence proving his innocence.  With the prosecutor’s consent, the court also vacated two felony convictions arising from Harrell’s failure to adequately comply with the state’s sex offender registry, restrictions that would never have been placed on him had he not been wrongly convicted.  In total, he wrongly served 4 years of an 8-year prison sentence and nearly 20 years on the sex offender registry.

“This has been a long day coming for Mr. Harrell who was deeply affected by the four years he spent in prison, and has had an extremely difficult time over the last two decades trying to comply with the sex offender registry while fighting for justice,” said Vanessa Potkin, Director of Post-Conviction Litigation for the Innocence Project, which is affiliated with Cardozo School of Law.  “At the moment a person is convicted of a felony their life opportunities are fundamentally and forever restricted.”  According to a research project commissioned by the National Institute of Justice, there are nearly 50,000 legal sanctions and restrictions imposed upon people because of their convictions.  “Because of the restrictions and stigma Mr. Harrell faced as a sex offender, he wasn’t just sentenced to eight years in prison, but to a lifetime of unemployment and homelessness.   His case is a powerful reminder that the wrongly convicted continue to suffer long after they are released from prison and shouldn’t be denied DNA testing to prove their innocence.  Fortunately, New Jersey has already amended its DNA testing law to eliminate its incarceration requirement, but several states, including neighboring Pennsylvania, have yet to remove barriers to testing that can prove innocence.”

On September 18, 1988, a seventeen-year-old woman was raped at around 10:15 PM on her way home from her job at McDonald’s.  She gave a general description of her attacker and said that she had seen him on a previous occasion about three weeks prior at the McDonald’s.  Harrell was arrested three days later on September 21st in the McDonald’s parking lot after the victim, at work, notified the police that she saw the person she believed to be her attacker.

Harrell, who had just turned 22, lived with his family across the street from the McDonald’s, which he patronized frequently.  When Harrell learned what he was being charged with, he started crying, explaining at trial “I was real scared, I didn’t know what was going on.”   The arresting officer described Harrell as shocked.  At police headquarters, Harrell insisted on his innocence and asked to see the person accusing him, thinking she would realize her mistake. Harrell was brought to the victim, and she maintained that he was her assailant.

To corroborate the victim’s identification, the State presented testimony from an analyst with the New Jersey State Police Laboratory that serology testing placed Harrell in less than 2 percent of the population who could have deposited sperm found in the victim’s rape kit.  This was incorrect.  Because only victim’s blood type was detected in the testing, in actuality no conclusion could be drawn as to the source of the sperm.

Harrell testified in his own defense, insisting that he was playing basketball with friends, that included a police detective, and later went on a bike ride with his three-year-old nephew to a friend’s house nearby.  Several of his friends, including the detective, also testified in his defense. On May 19, 1992, Harrell was found guilty of second degree sexual assault.

“The erroneous testimony of the serology analyst is especially troubling because it violates very basic scientific principles, and the implications are far-reaching.  The analyst in this case testified as an expert in hundreds of cases inall 21 counties in New Jersey, and as a supervisor in the biochemistry unit, he oversaw the work of other examiners,” Potkin said. “The state has an obligation to conduct a thorough independent review of all of the cases potentially impacted to insure that other people weren’t wrongly convicted based on flawed serology.”

Harrell’s case comes to light at a time the state is confronting other issues of forensic concern.  Last year, the Federal Bureau of Investigation (FBI) released the initial results of its review of convictions involving microscopic hair comparison provided by FBI examiners. The FBI acknowledged that its microscopic hair analysts provided flawed testimony in more than 95 percent of the 327 nationwide cases it reviewed.

To date, the Department of Justice (DOJ) has identified 21 individuals convicted in New Jersey in cases where FBI analysts made errors in their testimony and/or reports.  In addition, the FBI has alerted states of the potential need to review convictions involving state employed analysts who received FBI training and may have provided testimony that exceed the limits of science.  The FBI provided training to New Jersey State Police hair examiners from 1979-2000.

The Innocence Project agreed to take Harrell’s case in 2013 and sought DNA testing of the evidence, including the rape kit.  While it initially opposed testing because Harrell didn’t qualify under the statute since he was no longer incarcerated, the prosecution ultimately agreed to testing.  New Jersey enacted a law, which was approved by Gov. Chris Christie in November 2015, that creates a right for individuals who are no longer incarcerated to access post-conviction DNA testing, as 39 other states do, so that others like Dion Harrell can prove their innocence after their prison sentence is over.

“Forensic DNA testing is an innovation that will modernize the criminal justice system by redefining past practices,” said Gordon Johnson (D-Bergen), a New Jersey Assembly member championed passage of the law.  “By expanding access to DNA testing, those in and out of jail, who have been wrongfully convicted, can seek justice.”

After DNA testing of the rape kit excluded Harrell and pointed to an unknown male, the prosecution immediately agreed to vacate the underlying conviction as well as two felony convictions that Harrell incurred for failing to comply with the state’s stringent sexual assault registry.  Harrell was surrounded by his family in court today when the court reversed the conviction and the indictments were dismissed.

Harrell’s family members have established a donation site at https://www.razoo.com/us/story/Dionharrell for those wishing to make contributions.

RELATED: Follow #DionHarrell on his Exoneration Day after 28 Years of Injustice