Department of Justice to End National Commission on Forensic Science

The Department of Justice (DOJ) announced Monday at the final meeting of the National Commission on Forensic Science its decision not to renew the federal advisory body’s charter.

Attorney General Jeff Sessions said the department’s next steps would be developed by an internal committee that will not include independent scientists.

“Limiting the ‘relevant scientific community’ to forensic practitioners is a disservice to that field and to the criminal justice system,” the scientists wrote.

“The Department of Justice’s decision not to renew the commission is a giant step backwards,” said Innocence Project Executive Director Madeline deLone. “By including independent academic scientists, this commission contributed significantly towards ensuring that forensic practices are based on the best available science. The commission had begun to do very important work to make forensic evidence more scientific, and now we won’t see what it could have accomplished. There are still many people in our prisons unjustly because of erroneous forensic practices and many more will continue to be wrongly convicted because of this.”

The DOJ also announced that it would suspend its internal and ongoing work to develop testimonial standards based on scientific principles and to conduct a retrospective review of the FBI forensic testimony in light of the discoveries of the FBI microscopic hair comparison review. 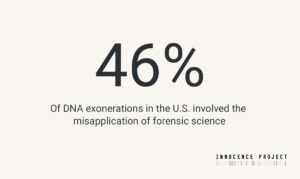 “[T]he department has literally decided to suspend the search for the truth,” said Peter J. Neufeld, co-founder of the Innocence Project, which has reported that nearly half of 349 DNA exonerations involved misapplications of forensic science. “As a consequence innocent people will languish in prison or, God forbid, could be executed.”

The commission also heard from Keith Harward, a DNA exoneree who spent 33 years in prison for a violent sexual assault and a murder that he did not commit. Harward’s conviction was based in large part on a bite mark identification in which six forensic odontologists erroneously agreed that Harward’s teeth made a bite that was found on one of the victims. Bite mark evidence has since been widely discredited by scientific bodies.

“It saddens me that they’ve stopped this [the commission],” Harward said. “Because they need something like this going on, with different views, sitting down to decide what is right and what is wrong. Just this year there’s been two innocent people, like me, who’ve gotten out of prison. Explain to me, what does it take to admit that some of these forensic practices just don’t work?”