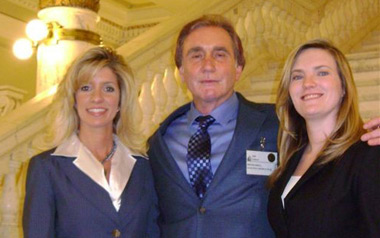 Dennis Fritz knows what it’s like to be denied DNA testing. By the time the Innocence Project took his case in 1996, all of his appeals had been denied. He was finally proven innocent of murder through DNA testing in 1999, after 11 years in prison. Now, he works to make sure that other innocent prisoners don’t have to endure the same injustice. In March, Fritz shared his experience with the members of the South Dakota House Judiciary Committee and urged them to pass a law grating access to postconviction DNA testing.

In March, the new law passed and South Dakota became the 45th state to enact a postconviction DNA access statute. “To be truly involved with legislation of that magnitude made me feel like I was part of something that would really help people,” Fritz says.

The Innocence Project provided tactical and substantive support to Fritz and University of South Dakota Law Professor Christine Hutton, who also testified in support of the bill. In the coming year, the Innocence Project will work with Fritz and other exonerees to pass DNA testing laws in the three states in the nation that still don’t have them. Fritz’s home state of Oklahoma is one of those three. Fritz says, “Because I spent those years in prison for something I didn’t do, I feel that I have a responsibility to be a strong advocate. It’s kind of my way of fighting back. If I didn’t do that, I would feel like I’d be running from something that was laid down in blueprint for me to do.”