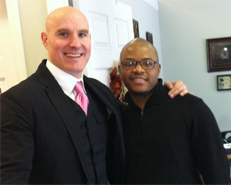 Earlier this month, we reported on the triple exoneration of three Illinois men when a judge tossed out their rape and murder convictions after DNA tests proved their innocence and implicated another man in the crime. Two other juveniles were wrongfully convicted of the same crime, but have yet to see their convictions vacated, reported the Associated Press.

Robert Taylor and brothers Jonathan Barr (above, right, with Innocence Project Staff Attorney Craig Cooley) and James Harden were released over the past two weeks, but since Robert Veal and Shainne Sharp signed confessions in exchange for shorter sentences, their road to exoneration could take longer, Veal’s attorney Stuart Chanen said.

“It can be solved, we just have to take a slightly different procedural approach,” Chanen said.

Cook County prosecutors have said they expect all the sentences to be vacated.