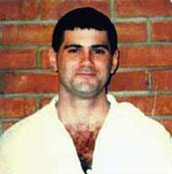 Cameron Todd Willingham’s surviving relatives aren’t the only ones in favor of his posthumous pardon. Ernest Willis, who was wrongfully convicted of arson based on similarly flawed science that claimed Willingham’s life, drove more than 600 miles from Mississippi to support the petition to clear his name.

Willis, who spent more than 17 years in prison before being exonerated the same year Willingham was executed, got to know Willingham behind bars and believed his friend was innocent, according to the


“It’s just an injustice that needs to be corrected,” Willis said, choking up with emotion. “Gov. Perry needs to step forward and pardon this man because he’s innocent. Give this family some relief.”

In a process that could take months, the Texas Board of Pardon and Paroles will review the petition before meeting as a group and may ask for additional information before making a decision.

A spokeswoman for Gov. Rick Perry told the Los Angeles Times he had not changed his position on the case, but that it was up to the board to decide whether to clear Willingham.