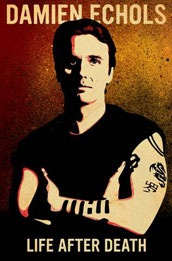 Damien Echols will read from his new memoir,

, at the Union Square Barnes and Noble on Sept. 21 and sign books afterwards. Echols is known as one of the “West Memphis Three” — three young men wrongfully convicted of the murder of three boys in Arkansas. The men were all released through an Alford Plea in August 2011. Echols had spent nearly 18 years on death row and his two co-defendants, Jason Baldwin and Jessie Misskelley, Jr. had been serving life sentences.

Here’s an excerpt from the book:


“If I start to believe that the things I wrote cannot stand on their own merit, then I will lay down my pen. I’m often plagued by thoughts that people will only think of me as either someone on death row or someone who used to be on death row. I grow dissatisfied when I think of people reading my words out of a morbid sense of curiosity. I want people to read what I write because it means something to them – either it makes them laugh, or remember things they’ve forgotten and that once meant something to them, or that it simply touches them in some way. I don’t want to be an oddity, a freak, or a curiosity. I don’t want to be the car wreck that people slow down to gawk at. . . . I want to create something of lasting beauty, not a freak show exhibit.”

. Johnny Depp, a longtime champion of the West Memphis Three, will also speak at the reading.