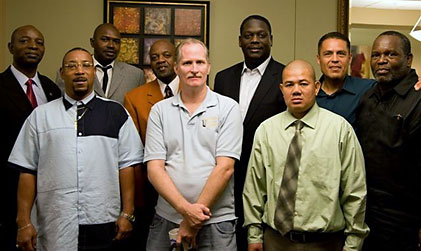 
In an effort to continue the fight against wrongful convictions and to free the innocent in Texas, Dallas District Attorney Craig Watkins urges state legislators to consider the Racial Justice Act so defendants can appeal their convictions and sentences on the basis of race, reported the Associated Press.


“The issue that we’re bringing to light is to make sure that everything is fair, no matter what you look like, no matter where you come from, and you’re treated just like anyone else,” Watkins said. “And if you deserve a death sentence, then you will get it. If you didn’t, then you shouldn’t be on death row.”

Watkins plans to file a bill in the next few months that would allow defendants to introduce evidence, either in their specific case or through general statistics, to argue that their prosecutions or sentences were influenced by race.


Despite several reforms passed in recent years that have expanded DNA testing and compensated the wrongfully convicted, Watkins said Texas still comes up short. In Dallas County, 28 of the 33 people who have been exonerated of crimes since 2001 are black, according to Debbie Denmon, spokeswoman for the DA’s office.

According to a 2008 study of racial disparity in sentencing, black defendants in Harris County, which includes Houston, were more likely to get a death sentence than white defendants. That study revealed that blacks comprise 40% of Texas’ nearly 300 death row inmates while just 11% of the state’s population is black.


“I would imagine that there are individuals, not just in prison, but particularly on death row, that were convicted because of the color of their skin,” Watkins said.

“We’re just going to keep pushing the envelope forward to make justice work for the state of Texas, and Texas has an opportunity to lead the country when it comes to what it means to be a prosecutor and what justice is,” Watkins said.

According to the Associated Press, Kentucky and North Carolina have passed similar legislation in 1998 and 2009, respectively. Kentucky’s law allows a defendant facing the death penalty to seek a hearing under the act before trial, and North Carolina’s law allows defendants to use some statistics and direct evidence that applies to the individual case.