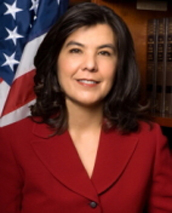 Cook County State’s Attorney Anita Alvarez is the first woman and first Hispanic to hold the post, and she easily won re-election last month, but her response to two Cook County DNA exonerations may have damaged her politically.

On Sunday, Alvarez appeared on 60 Minutes in a segment about two Chicago-area exonerations in which nine young men were wrongfully convicted largely based on their false confessions. Despite DNA evidence proving their innocence and pointing to the real perpetrators, Alvarez said she still believed in the men’s guilt and didn’t reject necrophilia as an explanation for why the convicted rapist’s DNA was found inside the victim. The


“Frankly, there’s not a lot of difference between her saying necrophilia is a possibility in this case and saying the earth is flat,” Innocence Project Co-Founder Peter Neufeld said Monday. “For the state’s attorney to simply get up there and say, no, we have more confidence in the aggressive interrogations of teenage boys than to DNA hits to these offenders with known MOs — it indicates a lack of fitness to the job.”

more about the cases