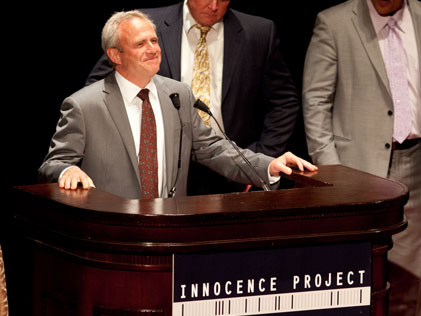 A rare Texas legal proceeding called a “Court of Inquiry” began this morning to consider whether a former Texas prosecutor should face criminal charges for his involvement in the wrongful conviction of Michael Morton, who served 25 years behind bars for the murder of his wife, Christine. The Innocence Project helped clear Morton through DNA testing, which proved his innocence and implicated another man.

Judge Ken Anderson, who was the district attorney prosecuting Michael Morton in 1987, is accused of concealing several pieces of evidence pointing to Morton’s innocence during and after the trial. He has denied any wrongdoing in the prosecution of the case.

Tarrant County Judge Louis Sturns will hear evidence and then issue a ruling or take the matter under advisement. If he determines that Anderson acted unlawfully while prosecuting Morton, he will have to issue an arrest warrant charging Anderson, said the Austin American-Statesman.

Morton always maintained his innocence of the murder of his wife, who was found dead in their home by a neighbor the morning of August 13, 1986. At trial, the prosecution argued that Morton beat his wife to death after she refused to have sex with him upon returning from his 32nd birthday celebration at a restaurant. There were no witnesses or physical evidence linking Morton to the crime.

lists the following as the hidden evidence:

Read more about Morton in his

live from the courtroom.

is also in the courtroom providing live updates on Twitter.