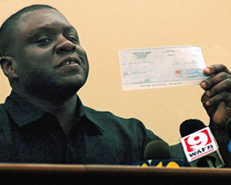 The unimaginable horror of a wrongful conviction is only compounded when an innocent inmate is released into a changed world without a helping hand or a safety net. Michael Williams (above) was 40 years old when he got the standard $10 check and bus ticket upon his release from Louisiana’s Angola prison. He was convicted of a rape he didn’t commit at age 16 and he literally grew up in one of the country’s most notorious prisons. DNA testing obtained by the Innocence Project proved his innocence of the rape for which he was serving life, but he was released with little support. Four years after his release, he was finally paid $150,000 in compensation by the state –just $6,300 for each year of his wrongful incarceration.

“When you are in prison for as long as I was, people either think you must be guilty or at least damaged,” Williams told the Wall Street Journal recently. “It’s been lonely. Very lonely.”

About one-third of the people exonerated after proving their innocence have not been compensated for the injustice they suffered and the time they spent incarcerated. Many of those who have been compensated, like Williams, received payments too small to start a new life. But the tide may finally be turning: 30 states now have statutes compensating the wrongfully convicted and several other legislatures are considering new laws or improvements of existing ones. In 2014, Minnesota enacted a new compensation law and Vermont and New Jersey improved existing laws.

Some of these new laws go further than a payment to the exoneree – they provide services like medical care, education and counseling release. Many states provide funding for tuition , counseling, job training and other services.

Visit our map section to learn if your state has an exoneree compensation law.