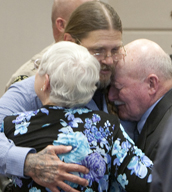 In the year since his exoneration through DNA testing, Robert Dewey has been living hand to mouth without the compensation that could help him rebuild his life. That is about to change this week, when the governor signs a compensation bill into law.

When passed, the Compensation for Persons Wrongly Convicted bill will compensate Dewey over $1,000,000, minus federal taxes, for his nearly 18 years of wrongful imprisonment. He will also be eligible for four years of higher education on the state’s tab, reported The Denver Post.

Dewey, who has survived on Social Security payments of about $600 a month and $87 in food assistance, testified before the Legislature earlier this year about his needs as a 52-year-old man suddenly turned back into the world with no job skills and no financial resources.


“I’m like a deer in the headlights,” he told lawmakers, some of whom cried over his story.

Dewey, a motorcycle enthusiast, plans to ride to the state Capitol on Wednesday to see the legislation signed. According to the legislation, Dewey and future exonerees will have to obtain health insurance and complete a financial management course. The measure also specifies that a future Class 1 or 2 felony conviction will discontinue the compensation.

compensation for the wrongly convicted