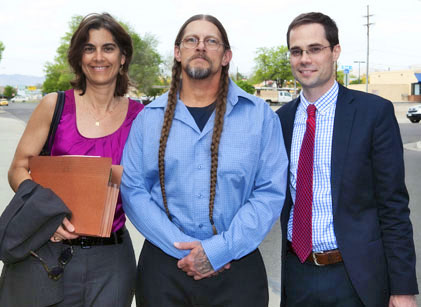 Robert Dewey, recently exonerated through DNA testing after 17 years of wrongful imprisonment, demonstrates the importance of state support for the wrongfully convicted. Dewey has received nothing from Colorado, which lacks a compensation law, and is currently living off food stamps and financial assistance from the Innocence Project’s Exoneree Fund. Dewey spoke to the Denver Post about his experience:


“I didn’t even get the ‘gate money.’ All I got was an apology. The prosecutors said ‘we’re really sorry, have a nice life’,” Dewey said two months after his release from prison, when new DNA testing identified a new suspect in the 1994 killing of a young Palisade woman.

About half of the states already have compensation laws in place, though the assistance that they provide varies wildly. Texas provides $80,000 per year of wrongful imprisonment and $25,000 per year on parole or as a registered sex offender as well as social services including tuition, health care and reentry services. Wisconsin provides a maximum of $25,000 regardless of the time served and offers no social services. On average, the exonerated wait three years to receive the funds, and exonerees in states without compensation laws may never receive any assistance.


The Innocence Project is also lobbying for other types of help for Dewey and others wrongly imprisoned. The organization wants to see immediate re-entry funds and access to job training, affordable housing, counseling, educational, health and legal services upon an innocent person’s release.

Rebecca Brown, director of state policy reform with the Innocence Project, said she is beginning preliminary work in Colorado to push for passage of compensation legislation.

“I’m in the process of reaching out to a range of stakeholders to see what might be possible in the next legislative session,” she said.