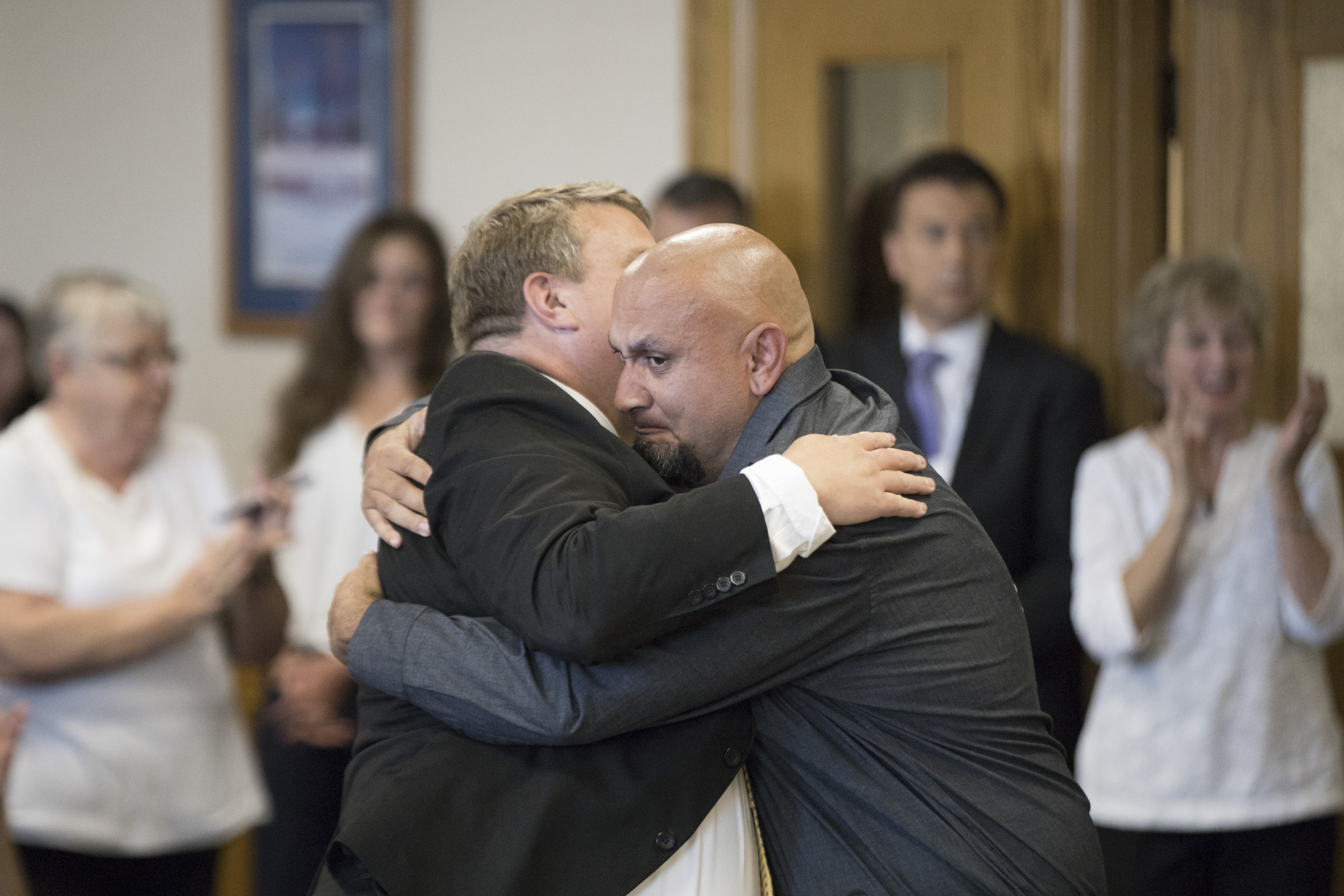 (Idaho Falls, ID – July 17, 2019) Today, the District Court of the Seventh Judicial Circuit in Idaho Falls, Idaho, granted the Bonneville County District Attorney’s motion to vacate the 1998 murder conviction of Christopher Tapp based on actual innocence and to drop all charges. The court’s decision was based on new DNA testing which excluded Tapp from the crime scene evidence and identified Brian Dripps as the man who actually raped and murdered Angie Dodge in 1996. Dripps was much older than Tapp and had no connection to him. This is the nation’s first exoneration to rely on genealogical DNA testing.

“The system thought that I could be thrown away.”

“The system thought that I could be thrown away. They thought that I’d never amount to anything,” said Tapp. “They were wrong. I want people to know that I’m innocent. I’ve said it for the past 22 years. Finally, the truth is being revealed. I am appreciative and deeply humbled that this moment has finally come.” 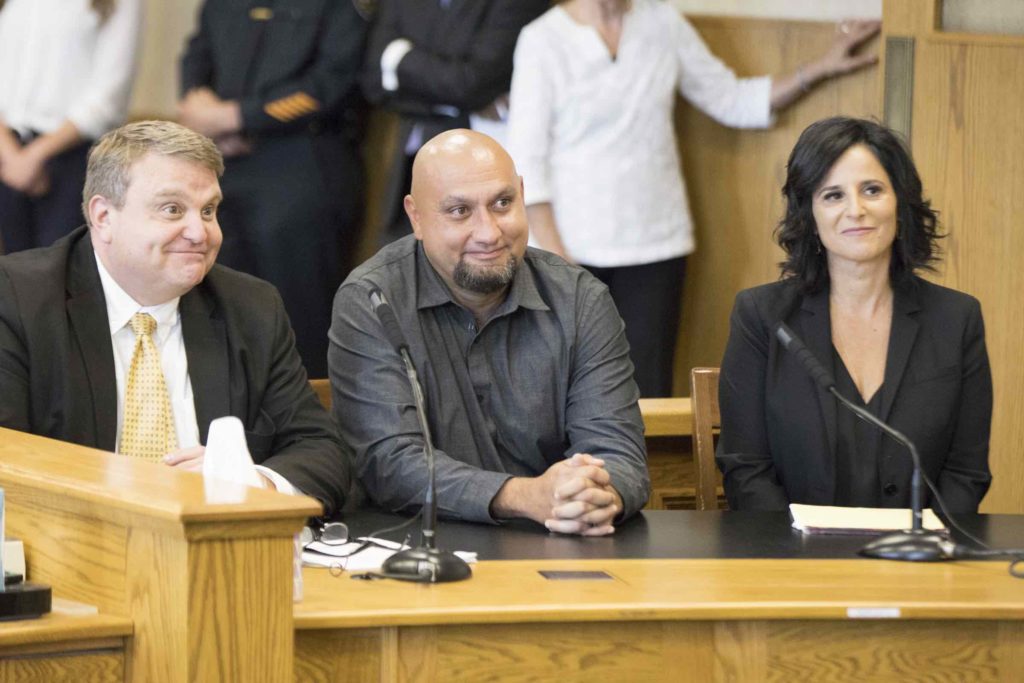 Ever since his 1997 trial, Tapp and his attorneys have argued that he was factually innocent and that the state’s case against him was rooted in police-driven coerced statements that included crime scene details police fed to him. The police used interrogation techniques over multiple days proven by scientific and legal experts to be psychologically coercive and capable of producing false confessions.

“We are all deeply relieved that, finally, after more than 22 years, the court has acknowledged Mr. Tapp’s innocence. Sadly, this is a case that should have been resolved decades ago. DNA evidence excluded Mr. Tapp before he went to trial in 1997. But this case is one more example of how false confessions trump all other evidence in our criminal justice system,” said John K. Thomas, Tapp’s lead attorney.

Sadly, this is a case that should have been resolved decades ago.

“In more than two dozen exoneration cases, innocent people like Mr. Tapp were convicted even though they were excluded by DNA testing before they even went to trial. In nearly all of these cases, rather than recognizing the DNA exclusion for what it was—evidence of innocence—prosecutors pursued and secured wrongful convictions because of their misplaced faith in police-induced custodial statements over actual science,” said Vanessa Potkin, the Innocence Project’s director of post-conviction litigation and part of Tapp’s legal team. 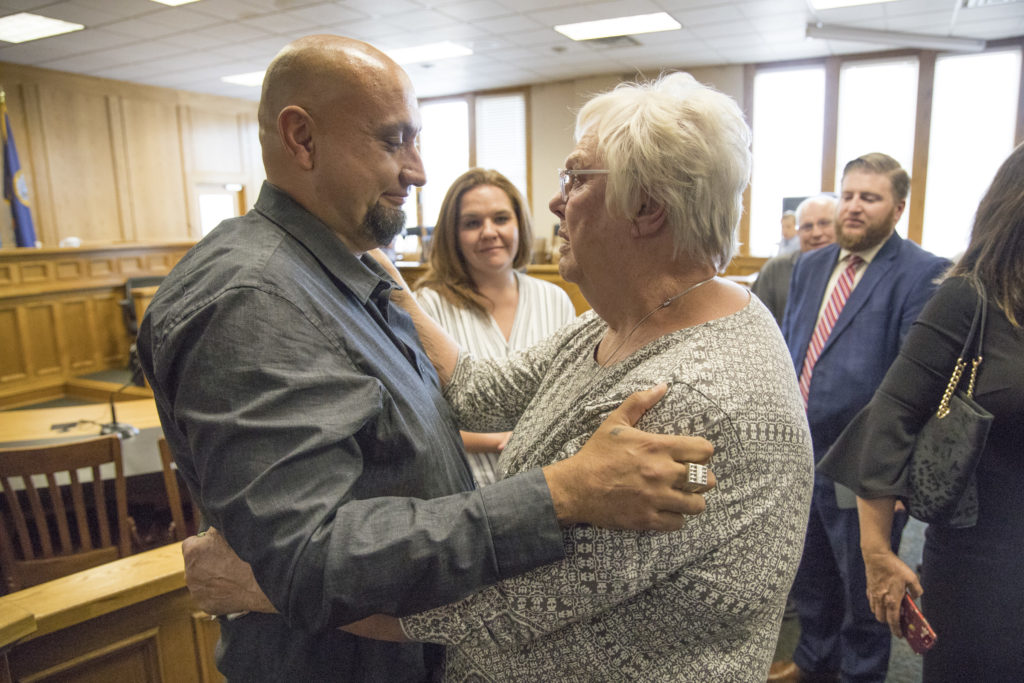 In 2017, after more than 20 years of wrongful incarceration, Tapp was released from prison based on additional DNA testing. While the court vacated his rape conviction, Tapp was re-sentenced for first-degree murder. This past May, however, Idaho Falls police announced that following the creation of a vast family tree for the DNA profile isolated from the rapist’s semen, Brian Dripps was identified as the source of the semen. Dripps was arrested, additional DNA testing confirmed the match and he offered a detailed confession to the rape and murder, explaining to the police that he’d acted alone. Further investigation showed that Dripps lived across the street from the victim at the time of the murder.

We used every new technique we could find to analyze the DNA to advance Mr. Tapp’s innocence claim.

In 1998, despite clear evidence of his innocence, Tapp was wrongfully convicted of first-degree murder and rape after 18-year-old Dodge was discovered in her Idaho Falls apartment, stabbed to death and her throat slashed. No physical evidence linked Tapp to the crime. In fact, before the case went to trial, DNA testing conducted by the state excluded Tapp as the source of semen deposited by the rapist immediately before he murdered her. Nonetheless, law enforcement pursued Tapp as the prime suspect. 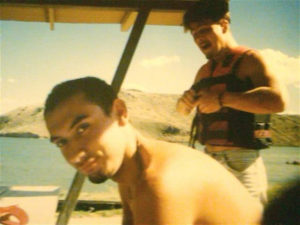 Tapp as a teenager before his wrongful conviction.

Over the course of several weeks in early 1997, investigators subjected Tapp to more than 30 hours of intense interrogation. Early on, Tapp told police that he was not involved and had no knowledge of the crime. Yet, as police questioning continued, in conjunction with their threats of execution and false promises of leniency, Tapp eventually implicated himself as well as two other innocent men suggested to him by the police based on their erroneous theory of the case.

The prosecutors’ case rested on Tapp’s confession, although it was mired with troubling inconsistencies and the testimony of a young woman who the police manipulated into falsely claiming she heard Tapp mention his involvement in the murder at a party. Tapp and his defense argued at trial that the confession was false and coerced by investigators who were ignoring all other evidence, including the compelling exculpatory DNA results. Nonetheless, Tapp was found guilty and sentenced to life in prison plus 15 years. The district court rejected the prosecution’s request for the death penalty.

The Idaho Innocence Project (IIP) took Tapp’s case in 2007, changing the Idaho DNA testing statute to allow for Tapp’s DNA petition and helping Idaho Falls police identify the male DNA lineage that eventually led to the new suspect. The IIP worked with John K. Thomas of the Bonneville County Public Defender’s Office for more than a decade to test several items of evidence.

The Innocence Project in New York joined the defense more than five years ago. Through their investigation, the legal team worked with false confession expert Steve Drizin to examine the more than 30 hours of recorded video interrogation and discovered that police fed the then-20-year-old Tapp facts about the crime scene using deception and other sophisticated and psychologically manipulative techniques to eventually secure a false confession.

More than 25 percent of the more than 360 wrongful convictions overturned by DNA evidence in the United States have involved some form of a false confession. Research into these exoneration cases has revealed various factors that lead to false confessions, including psychologically coercive techniques—such as investigators’ use of false statements about the presence of incriminating evidence, intimidation or use of force by law enforcement and police misleading suspects to believe they’ll be released if they simply confess—that are rooted in securing confessions as opposed to gathering information and facts about the case.

One solution to prevent false confessions is for states to enact statutes or court rules that require custodial interrogations to be recorded in their entirety. Idaho does not have such a statute in place and, therefore, should pursue a mandate for the recordation of interrogations. As demonstrated by the Tapp case, in which a large portion of the interrogation was recorded, it’s imperative that the state also implement alternative interrogation methods that are neither guilt-presumptive nor driven by techniques that are coercive or based in deception. 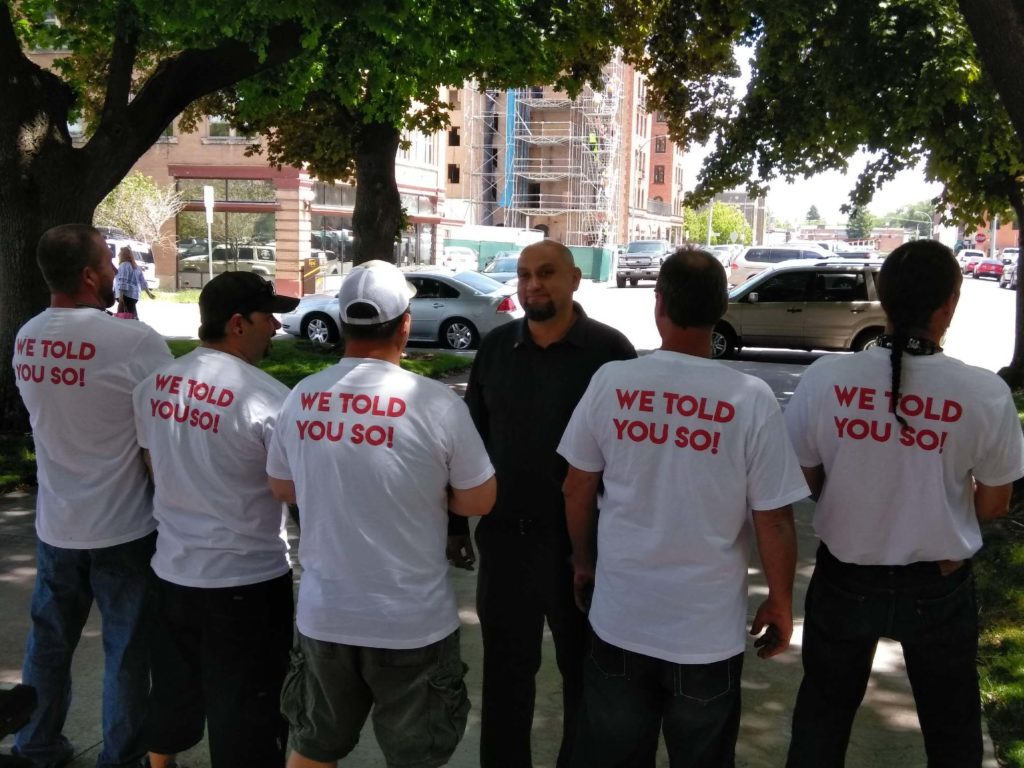 Chris Tapp, center, surrounded by his friends after the exoneration on July 17, 2019. Photo courtesy of Vanessa Potkin.