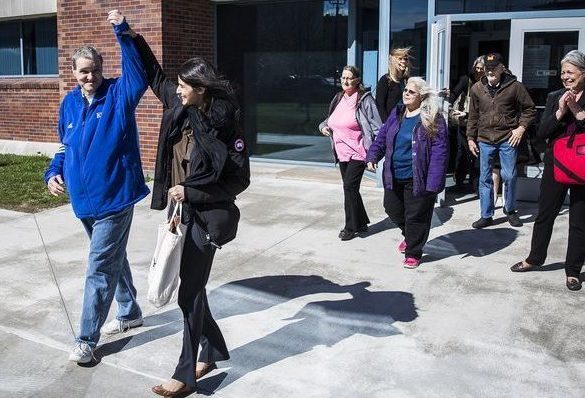 In May 2017, William Barnhouse became the 350th person exonerated through DNA testing. Barnhouse, who dealt his entire life with serious mental health conditions, was in prison for 25 years for a sexual assault he didn't commit.

On April 21, 1992, a 22-year-old woman was raped behind a vacant building in Muncie, Indiana. Based on the description she gave at the scene, police canvassed the area and picked up 35-year-old William Barnhouse.

The police took Barnhouse to the scene and stood him next to three police cars. As officers shined flashlights in his face, the victim identified Barnhouse as her attacker.

Barnhouse went to trial in Delaware County Circuit Court in December 1992. The victim identified him as her attacker.

A crime lab blood analyst from the Indiana State Police said he was able to “match” genetic markers in the biological evidence found on the woman’s jeans and in the rape kit, and that he could not eliminate Barnhouse as the source of the evidence.

A hair analyst from the Indiana State Police said that a hair found on the woman’s body was a “match” for Barnhouse—a statement that has since been scientifically proven to be an inaccurate overstatement.

The defense presented evidence that Barnhouse—who denied the crime—suffered from mental illness all his life.

In closing argument, the prosecution told the jury that the hair was a “silent witness” against Barnhouse. On December 15, 1992, the jury found Barnhouse guilty but mentally ill of rape and criminal deviant conduct. He was sentenced to 80 years in prison.

In 2013, the FBI reported that testimony asserting that microscopic hair comparison could produce a “match” between two hairs was scientifically invalid. The FBI, the Department of Justice, the Innocence Project, and the National Association of Criminal Defense Lawyers began a review of FBI analysts’ testimony and reports. They determined that analysts had provided erroneous testimony or reports in more than 90 percent of the cases reviewed by 2017. The analyst who testified in Barnhouse’s case is not part of that review, which includes only FBI analysts. It does not include the many analysts, such as the analyst in Barnhouse’s case, who were trained by the FBI or who relied on the same techniques and testimony employed by the FBI.

In 2016, the Innocence Project and the Wrongful Conviction Clinic at Indiana University McKinney sought DNA testing of the sperm in the vaginal swabs in the rape kit and on the sperm found on the victim’s jeans. The Delaware County Prosecutor’s Office agreed to the testing.

The testing identified the same male DNA profile in the rape kit and on the jeans, and excluded Barnhouse as the source of the biological evidence. The prosecution joined with Barnhouse’s attorneys in requesting that his convictions be vacated. On March 8, 2017, Barnhouse was released from prison. The prosecution filed a motion to dismiss the charges on May 9, 2017 and the judge granted the motion on May 10, 2017.