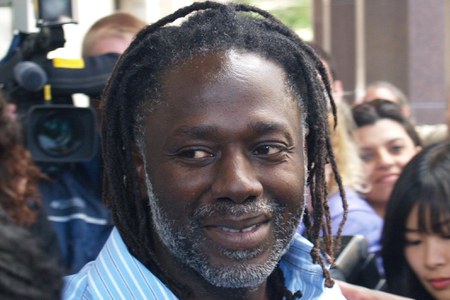 Walter Swift served 26 years in Michigan prisons for rape before evidence of his innocence led to his exoneration and release in 2008. He was wrongfully convicted based in part on a highly questionable eyewitness identification and incomplete forensic testimony.

The Crime
On September 2, 1982, a woman was playing with her seven-month-old son in her Detroit home when an intruder grabbed her from behind. He dragged her to her upstairs bedroom, where he removed her clothing and raped her. He allowed her to cover herself with a robe before leading her downstairs to locate her purse. He took $60 from her purse, as well as her wedding band and another $100 in cash from the house. The perpetrator raped the victim again on a rug on the first floor. He then told the victim to close her eyes and fled.

The Investigation
When police arrived at the victim’s house, they collected the robe she was wearing and the sheet from her bed. She was taken to a local hospital, where a rape kit was collected. The victim described the perpetrator as a clean-shaven African-American man between 15 and 18 years old, about 5’10” tall, with an unusual hairstyle with very small braids.

Eight days after the crime, the investigating officer, Janice Paavola, showed the victim several hundred photos of black men between 15 and 25 years old. The victim selected seven photos based on various characteristics in common with the perpetrator. At this time, Paavola decided that the person in the next photo the victim chose would be included in a live lineup. Walter Swift’s photo happened to be the eighth she chose, saying his eyes were similar to those of the perpetrator. Paavola wrote in a 2003 affidavit that the victim did not say Swift was the perpetrator and didn’t place any emphasis on his photo compared to the other seven photos. The officer “was confident that she would not identify Mr. Swift as the perpetrator in the lineup.”

Officers learned that Swift did not have braids, had a mustache and had a black eye at the time of the crime. Despite these inconsistencies, the lineup was conducted a few days later. Swift and four other men participated; they ranged in age from 20 to 34 and ranged widely in height and build. The officer told the victim that the man whose photo she chose would be included. The victim tentatively selected Swift, saying “I believe it is number 2.” In her 2003 affidavit, the officer said she did not consider this a positive identification and scheduled a polygraph test for Swift to further investigate his possible role in the crime.

Paavola scheduled the polygraph examination, but would soon learn that it had been cancelled by a sergeant and a warrant had been issued for Swift’s arrest. The sergeant told Paavola that “Mr. Swift may not have done this crime but [the sergeant] was sure that he did some crime before and had gotten away with it.” Based almost exclusively on the victim’s questionable identification, Swift was charged with sexual assault and robbery.

The Trial and Forensic Evidence
Swift was tried before a jury in Detroit two months later. He was represented by a court-appointed attorney.

The state’s case focused on the victim’s identification of Swift and presented an incomplete account of how the victim identified him. Most critically, during trial, the jury was led to believe that the victim was shown hundreds of photographs at the police station of men who fit her description of the perpetrator, that she selected only Walter Swift’s photo out of that photo array, and that she later confirmed the selection in a live lineup. As a result of suppression by state witnesses, and defense counsel’s failure to investigate, the jury never learned that the victim selected the photographs of seven other men as well and only identified Swift as the perpetrator after a highly tainted lineup.

Strong biological evidence of Swift’s innocence that existed before trial was also never presented to the jury. Prior to trial, defense counsel was provided with a report showing that Swift was a secretor (an individual whose blood group is evident from bodily fluids like semen and saliva) and that testing on semen stains from the robe and the sheet indicated that the semen stains may have been deposited by a non-secretor. Prosecutors called one of the two forensic analysts who conducted tests in the case. The analyst testified that semen was detected on the victim’s robe and sheet, but that he did know whether the person who deposited the semen was a secretor. He said that the other analyst on the case had knowledge of this result. The defense did not cross-examine the analyst presented at trial, and waived the testimony of the other analyst entirely.

Swift’s attorney, however, was not solely responsible for the failure to provide the jury with complete information about the forensic analysis. A second version of the lab report, which included additional lab results, was withheld by the police and never released to the prosecution or defense. The updated report provided further evidence that the source of the semen was likely a non-secretor and therefore unlikely to have been Walter Swift.

Swift’s defense consisted mainly of an alibi. His girlfriend at the time testified that he was with her when the crime occurred. Swift’s defense attorney, Lawrence R. Greene, failed to reveal serious flaws in the identification procedure, declined to cross-examine the forensic analyst who testified and did not call the other analyst as a witness. The attorney has been suspended from practicing law several times in the last decade based on misconduct and inadequate representation in other cases and his license was eventually revoked in Michigan.

After a two-day trial, Swift was convicted. Before his sentencing, Officer Paavola visited the judge to explain that she thought he had been wrongfully convicted. Later the same week, Paavola was transferred from the Sex Crimes Unit to patrol duty. Swift was sentenced to 20 to 40 years in prison.

Post-Conviction Appeals and Exoneration
The Innocence Project accepted Swift’s case in 1998 and began requesting searches for the biological evidence in the case. Although all evidence in the case had been lost or destroyed, the investigation began to uncover solid evidence of Swift’s innocence. In addition to staff attorneys and clinic students at the Benjamin N. Cardozo School of Law, a student from Ireland named Niamh Gunn was assigned to work on the case in 2003, and she would play a significant role in Swift’s exoneration.

Gunn won a competition at her college in Ireland to work at the Innocence Project in the summer of 2003; she extended her stay as she became more involved in Swift’s case and continued to work on his case for five years after returning to Ireland. In part because of her efforts, the police officer and lab analyst who worked on the case before Swift’s trial supported his quest for exoneration.

The cooperation that brought about Swift’s exoneration was unprecedented. The prosecutor who originally convicted him and Janice Paavola, the former police officer who testified at his trial, filed affidavits in support of vacating his conviction. The Innocence Project presented all of the evidence it had developed in the case to Wayne County Prosecuting Attorney Kym Worthy, whose office investigated the case thoroughly. Worthy’s office joined the Innocence Project on May 21, 2008, in asking a Michigan judge to vacate Swift’s conviction and dismiss the indictment. He was freed that afternoon after 26 years in prison for a crime he didn’t commit.