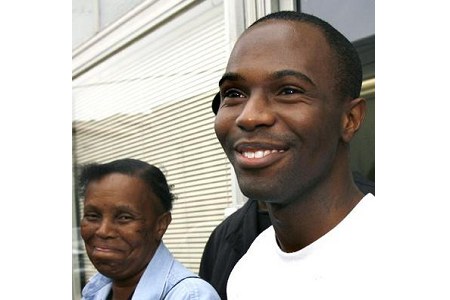 After his co-defendant Ryan Matthews was exonerated from Louisiana’s death row in 2004, Travis Hayes spent 2 ½ more years in prison for a crime that neither man committed. Finally, in 2006, Hayes’ conviction was vacated and he was released just before Christmas. On January 19, 2007, the prosecution dropped all charges against him.

The Crime
In April 1997, a man wearing a ski mask entered the victim’s store and demanded money. When the victim refused, the perpetrator shot him four times and fled, taking off his mask and diving into the passenger side window of an awaiting car.

The Identification
Several eyewitnesses saw the perpetrator flee. One witness was in her car and watched the perpetrator run from the store, fire shots in her direction, and leap into a car. When she was later showed a photographic array, she tentatively identified Ryan Matthews as the assailant. By the time of trial, she was sure that Matthews was the gunman.

Two other witnesses, in the same car, watched as the perpetrator shed his mask, gloves, and shirt as he fled. The driver claimed to have seen the perpetrator’s face in his rearview mirror while he was being shot at and trying to block the escape. This witness and his passenger were brought to a show-up hours later. The driver identified Ryan Matthews. His passenger was unable to make an identification.

Ryan Matthews and Travis Hayes, both seventeen at the time, were stopped several hours after the crime because the car they were riding in resembled the description of the getaway car. They were arrested and Hayes was then questioned for over six hours. In his initial statements to investigators, Hayes claimed that he and Matthews were not in the area when the crime occurred. Hayes eventually confessed that he was the driver of the getaway car, however. He stated that Matthews went into the store, shots went off, and Matthews ran out and got into the car. Both boys were described as borderline mentally retarded.

The Defense
The defense presented evidence that forensic testing of the mask excluded both Matthews and Hayes. A defense expert also testified that the car that the two boys were driving – the reason they were stopped – could not have been the getaway car because the passenger side window that Matthews allegedly jumped through was inoperable and could not be rolled down. Other witnesses to the crime described the shooter as being much shorter than Matthews.

Post-Conviction
Continued defense investigation by William Sothern and Clive Stafford Smith of the Louisiana Crisis Assistance Center and DNA testing in another murder case proved to be the keys to proving Matthews’ innocence. Another murder occurred shortly after the victim’s death in the same area. A local resident, Rondell Love, was arrested and pled guilty. Love bragged to other inmates that he also killed the victim, prompting Matthews’ attorneys to begin investigating Love. Rondell Love lived less than half a mile from the store (whereas Hayes and Matthews lived 11 miles away) and exactly matched the best descriptions of the perpetrator given by witnesses inside the store. DNA test results from the second murder were compared to results from the Matthews conviction, indicating that Love had been wearing the mask that was left behind in the victim’s murder. Testing on the mask, gloves, and shirt had already excluded Matthews and Hayes, but these results became conclusive after Love’s profile was included.

Over a year after this information was discovered, Matthews was granted a new trial. He was released in June 2004, on bond, as he awaited a new trial. In August 2004, prosecutors asked the court to lift the bond and vacate the conviction. Read about Matthews’ case here.

Even after Matthews was exonerated, attorneys at the Innocence Project – New Orleans fought for two and a half years to bring Hayes back into court. Finally, on December 19, 2006, Hayes was released from prison when his conviction was set aside. Prosecutors had 30 days to re-try Hayes, but decided to drop all charges against him.