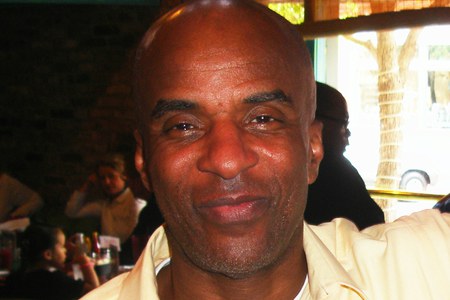 Innocence Project client Thomas McGowan served nearly 23 years in Texas prison for a rape he didn’t commit before DNA testing proved his innocence and led to his release in 2008. Like many wrongful convictions later overturned by DNA testing, McGowan’s conviction rested in part on an eyewitness misidentification in a faulty lineup.

The Crime
Around noon on May 7, 1985, a woman returned to her Richardson, Texas, home to find her television on the floor and pry marks on the door. Seconds later, she was assaulted by an African-American man who beat her severely and threatened her with a knife. He forced her to undress and tied a robe around her face and mouth. He put a work glove on his right hand, apparently to avoid leaving fingerprints, and tied her hands with the belt he had been wearing. He then raped the victim, drank a beer from the refrigerator and fled the house.

The victim called the police, who responded to the scene. She was transported to a local hospital, where a doctor treated her and collected swabs of semen found on her body.

The Identification
The victim described the perpetrator to police as an African-American man, about 5’ 8” tall, with a mustache. At the police station on the day after the crime, officers first arranged a live lineup with three possible suspects and three “fillers.” The victim did not identify anyone. Ten days later, she viewed a highly unusual photo lineup with seven pictures. Three of the photos were black-and-white photocopies of photographs. Of the four color photographs, all were mug shots with the defendant holding a booking placard. One placard said “Garland Police Department” and three said “Richardson Police Department.” Since the crime happened in Richardson, the three photos with Richardson placards suggested that these three men had been arrested in Richardson. McGowan was pictured in one of these three photos – his photo was in the system because of a minor traffic violation. The victim said she “thought” he was the perpetrator, but the police officer administering the lineup told her: “You have to be sure, yes or no.” After the officer’s instructions, the victim said McGowan was “definitely” the man who attacked her.

When she testified in court, the victim recounted the officer’s instructions: “He said if I was going to say it was somebody, if I was going to say it was that picture, I had to be sure. He said I couldn’t think it was him. He said I had to make a positive ID. I had to say yes or no.” She also testified that the photocopied images stood out as different from the rest of the group. Her identification would be the central evidence against McGowan at his trial.

Post-Conviction Appeals
McGowan filed an appeal immediately after conviction, arguing that an inadmissible argument was made by the prosecution during closing arguments and that testimony designed to bolster the eyewitness identification was improperly admitted. This appeal was denied. He sought the assistance of the Innocence Project, and his case was accepted in 2007.

The Dallas County District Attorney’s Office assisted Innocence Project attorneys in securing the biological evidence and moved quickly to approve DNA testing. In 2008, DNA test results showed that the sperm cells collected from the victim’s body during her hospital examination could not have come from Thomas McGowan or the victim’s boyfriend. McGowan was released from prison on April 16, 2008, and the Texas Court of Criminal Appeals granted his writ of habeas corpus on June 11, 2008., making his exoneration official. He had served 23 years in prison for a crime he didn’t commit.