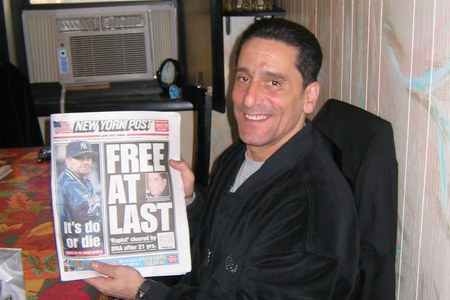 On October 6, 2006, Scott Fappiano walked out of the Kings County Supreme Court as a free man. After serving 21 years for rape, sodomy, burglary, and sexual abuse, postconviction DNA testing proved his innocence.

The Identification
The victim described the perpetrator as a white male of Italian descent. She was brought to the police station to view photographs of individuals who fit her general description. She selected a photograph of Scott Fappiano. Later, the vicitim’s husband also selected a photo of Fappiano out of an array. The victim chose Fappiano again in a live lineup containing Fappiano and police officers serving as “fillers.” On the same day, her husband viewed a live lineup and selected one of the “fillers.”

The Biological Evidence
The victim was taken to the hospital and a rape kit was collected. The vaginal smears and swabs tested positive for the presence of semen. The victim’s white jogging pants that she had put on after the assault also tested positive for semen in the crotch area. Police also collected a towel containing semen stains, cigarette butts, and a beer bottle from the victim’s apartment.

The Office of the Chief Medical Examiner (OCME) performed serology on the semen-stained towel and cigarettes. Fappiano was type O, and the victim’s husband was type A. These items had type A antigens on them. The jogging pants and rape kit could not be tested at the time of trial due to technological limitations.

The Trial
Fappiano was tried twice for this crime. The jury could not reach a verdict in his 1984 trial. He was tried again in 1985 and convicted of rape, sodomy, burglary, and sexual abuse. The court sentenced him to 20 – 50 years in prison.

Post-Conviction
In 1989, Fappiano was granted postconviction DNA testing of the semen-stained sweatpants. The District Attorney sent the evidence to LifeCodes, a private DNA laboratory. Lifecodes detected spermatozoa on the sweatpants, but no results were obtained. The sweatpants and rape kit were sent back to the District Attorney’s Office.

In 2003, The Innocence Project began representing Fappiano. A two-year search at the Office of the District Attorney and NYPD storage facilities did not turn up any evidence. In August 2005, however, Orchid Cellmark notified the Innocence Project that they had inherited materials from LifeCodes. Cellmark had two tubes of DNA extract from the sweatpants that corresponded to Fappiano’s case number. This evidence was transferred to the Office of the Chief Medical Examiner in New York. In 2006, the OCME performed multiple rounds of DNA testing over the course of the summer. They first determined that there was DNA from one male and one female in the sample. They then excluded Fappiano and the victim’s husband from the male portion. Lastly, the OCME confirmed that the victim was the contributor of the female portion of the extract from the sweatpants, establishing that the evidence had indeed come from the same crime and proving that Fappiano could not have been the perpetrator.

On October 6, 2006, Scott Fappiano’s convictions were vacated and he was released after serving 21 years in prison. He was greeted in the courthouse by his family.