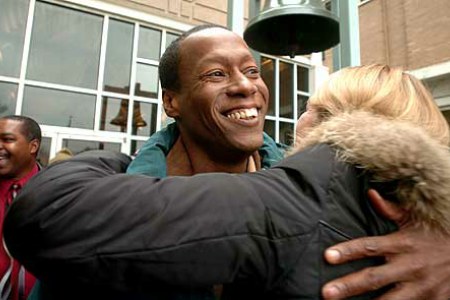 Robert Clark was convicted of rape, kidnapping, and armed robbery in 1982. For 24 years, he has adamantly proclaimed his innocence, maintaining that his conviction was the result of a mistaken eyewitness identification. In November 2005, postconviction DNA testing proved that Clark was not the perpetrator of the crime. On December 08, 2005, Clark was released from prison and his conviction overturned based on this new evidence.

The Crime
On July 30, 1981, the victim was abducted from a parking lot in East Atlanta, Georgia. A man with a gun forced his way into her car and threatened to kill her. He drove her to two secluded locations in Cobb County, beat her, raped her three times, and bound both her hands and her feet. He also robbed her, gagged her, and left her naked when he drove away in her car. The victim managed to partially untie herself and summon help from a passing driver. The police were notified and the victim was taken to the hospital, where a rape kit was collected.

The victim, who is 5’6″, initially described the perpetrator as a black male, medium complexion, thin face, high afro, about 5’7″, and about 120-125 pounds. She reported his clothing as faded jeans, a light colored shirt, and a western hat with a feather in the front.

On August 4, 1981, the victim saw her car outside of a store in Atlanta, Georgia. She also saw a man exiting the store and heading toward the car. She went to notify the police, but the man and car were gone by the time the police responded. Two days later, the victim again saw her car, this time at an apartment complex. As she passed by, she saw a man parking her car. A woman and children were also inside the car. She contacted the police and directed an officer to the apartment complex, where the driver, woman, and children were still in the car. As the officer walked toward the apartment building to find an address to call for backup, the man and the children exited the car and left.

The victim’s car was impounded. A canvass of the neighborhood turned up the name of Robert Clark as the driver of the car. At the time, Clark was about 6’2″, thin and 21 years old. The police contacted Clark by phone and he agreed to meet them, but failed to appear. On August 23, 1981, the police arrested Clark for motor vehicle theft. At the time of his arrest, police did not consider him a suspect in the rape case, as he did not match the victim’s description. He became a suspect after admitting that he was driving the stolen car on August 6, 1981, and was untruthful about how he had obtained the car. Clark initially claimed that he had gotten the car from a dancer he had met at a lounge. He later told investigators that he had gotten the car from Tony Arnold, a friend he had been trying to protect. By then, the victim had already identified Clark as the perpetrator of the rape.

The Identification
Several days after the attack, the victim had looked through books of photographs at the police department. She chose the picture of someone other than Robert Clark. On August 25, 1981, the victim was shown a photographic array that contained Clark’s picture. She chose that picture as someone that looked very much like the perpetrator. On August 27, 1981, she identified Clark from a live lineup. Clark was the only person in the lineup whose photograph was in the photographic array.

The Trial
Clark went to trial before a jury and was convicted on May 26, 1982. The victim testified that there was no doubt in her mind that Clark was the assailant.

Prosecutors presented serological evidence. A forensic scientist from the Georgia Bureau of Investigation testified that a microscopic examination of the vaginal slides from the rape kit had revealed the presence of spermatozoa. No ABO typing could be performed, however, because the vaginal swabs from the rape kit had been lost prior to trial. The remaining slides did not contain enough material for successful typing.

The defense maintained that Clark had been mistakenly identified and that he had received the car from Floyd Anthony Arnold – the same Tony Arnold that Clark told investigators about. Arnold more closely resembled the victim’s initial description of the perpetrator. Police admitted that they did not investigate Arnold after Clark had named him in his statement. The defense produced one witness, who testified that she had seen Tony Arnold in a car of the same make and color of the victim’s car. Her description of Arnold resembled the victim’s initial description. This witness also identified Arnold as the driver when he was brought into court.

Post-Conviction
Clark maintained his innocence and tried to obtain postconviction DNA testing in the late 1990s. His case was eventually taken by the Innocence Project in October 2003. In December 2003, along with local counsel at the Georgia Innocence Project, the Project filed a motion under Georgia’s postconviction DNA testing statute. Though District Attorney’s Office opposed the motion, testing was granted. The State then brought a successful challenge to Clark’s choice of laboratory.

In July 2005, the vaginal slide evidence was sent to Serological Research Institute (SERI) in California. Testing was completed in November 2005. The results showed that Robert Clark could not have contributed the spermatozoa found on the vaginal slide. The Innocence Project immediately requested that the District Attorney’s Office conduct a search for the male profile in CODIS and the state convicted offender DNA databases. The profile obtained from the vaginal slide was consistent with the profile of Tony Arnold, already in prison having served time for a 1985 sodomy charge and serving time for a 2003 cruelty to children conviction.

Exoneration
On December 8, 2005, Robert Clark regained his freedom after proving his innocence. He became the fifth person in Georgia to be exonerated by postconviction DNA testing. All of these cases involved mistaken eyewitness identification.