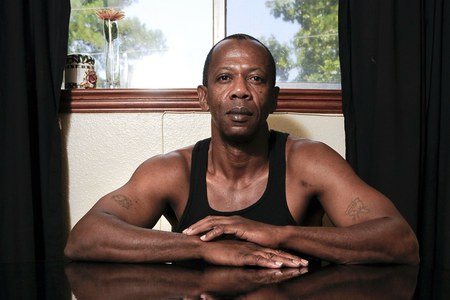 Rickie Johnson served 25 years in Louisiana prison for a rape he didn’t commit before DNA testing proved his innocence and exonerated him. He was released in 2008 after DNA results in his case implicated another man, who is serving life in prison for another rape several months later in the same apartment complex.

The Crime
In the early morning hours of July 12, 1982, a 22-year-old woman awoke in her northwest Louisiana home to find a man holding a gun to her head. The man raped the woman twice and stayed at her house for four hours. He told her his name was Marcus Johnson and mentioned several details, claiming they were about his life. He claimed to be looking for an ex-girlfriend of his from Many, Louisiana. He said he was on probation, he was from Leesville, Louisiana, and had relatives in the towns of Natchitoches and Monroe.

The victim reported the rape the next morning, at which point she told police her attacker was an African-American man between 5’6″ and 5’8″, weighing about 140 pounds, with facial hair and a scarf tied around his head.

The Investigation and Identification
A detective from the Sabine Parish Sheriff’s Department contacted the Leesville Sheriff’s Department to ask if they had a man named Marcus Johnson on file. There was no record of Marcus Johnson, but Leesville officers told the detectives about Rickey Johnson, who was on probation for a misdemeanor traffic violation.

Rickey Johnson matched some of the details provided by the perpetrator – he is from Leesville, has a child with a woman in Many and had relatives in Natchitoches and Monroe – and he became a suspect. Police showed the victim a photo lineup consisting of just three photos; Johnson’s photo, which was in the center, was eight years old. The victim told police that she had ample time to see the perpetrator’s face, and she identified Johnson as the perpetrator, even though he had a prominent gold tooth which was never part of her description of her attacker.

He was arrested two days after the crime, and no other suspect would ever be investigated. From the time of his arrest, Johnson asserted his innocence. Six days later, police conducted an in-person lineup with five individuals. Again, Johnson was in the center, and again the victim identified him as the assailant. This lineup was not presented at Johnson’s trial because it was ruled inadmissible in court since Johnson did not have an attorney present at the lineup.

Tests at the Shreveport Crime Lab determined that evidence collected from the victim at the hospital included sperm from the perpetrator, and serological testing showed that Johnson – and 35% of the African-American population – could have been the contributor.

The Trial and Conviction
Johnson was charged with aggravated sexual assault and tried before a jury in Sabine Parish, Louisiana. The victim identified him at trial, saying she was “positive” that he was the perpetrator and there was “no question in [(her]) mind.” She said the apartment was dark until about 15 minutes before the perpetrator left.

Prosecutors also presented the victim’s photo identification of Johnson and the serological evidence that his blood type matched the blood type of the perpetrator – as determined from the sperm cells from the perpetrator. Johnson’s defense attorney presented evidence that he was with family members and at the dentist on the day of the crime. Johnson did not testify. He was convicted by the jury and sentenced to life without parole.

In late 2007, mini-STR DNA testing was performed on the sperm from the perpetrator of the crime, and the results proved that Johnson could not have been the attacker. This is the first DNA exoneration using mini-STR technology, which allows labs to accurately test degraded or extremely small samples.

In January 2008, the profile was checked against the Louisiana DNA database, and implicated another man, John McNeal, who is serving life in prison for a rape committed in 1983 in the same apartment complex as the crime for which Johnson was convicted. In the 1983 rape – committed three months after Johnson was convicted – the perpetrator, later determined to be McNeal, broke into the home of a 19-year-old woman, claimed to be looking for a girlfriend, threatened her with a knife and raped the victim.

After 25 years in prison for a rape he didn’t commit, Rickie Johnson was released and exonerated on January 14, 2008.

Watch a video below of Johnson reuniting with his friend and fellow exoneree Calvin Willis.