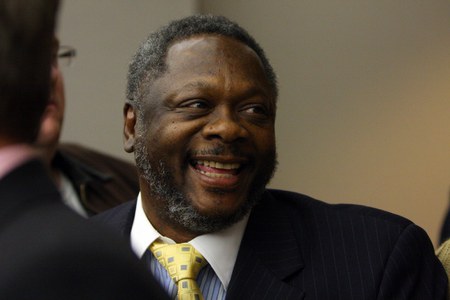 All the attacks occurred in the same neighborhood.

All three victims described their attacker as a black man weighing 170 to 200 pounds, was between 5 feet, 9 inches and six feet tall, with no facial hair and possibly gold teeth.

Wyatt was arrested on January 24, 1981 and charged with all three rapes. At the time, he weighed about 140 pounds, was 5 feet 4 inches tall, had a mustache and no gold teeth.

In July 1981, Wyatt, after rejecting an opportunity to plead guilty in return for a five year prison sentence, went on trial in Dallas County Criminal District Court for rape that occurred on November 1, 1980. The victim identified him as her attacker.

The prosecution presented the testimony of a Dallas police officer, who said that after Wyatt was arrested, he said that he had lost about 30 pounds in the previous 10 days.

A forensic analyst testified that based on serological testing of semen recovered from the victim, Wyatt was included in the 20 percent of the population who could have been responsible for the rape.

In Wyatt’s defense, a nephew testified that Wyatt never weighed more than 140 pounds.

On July 31, 1981, a jury convicted Wyatt of aggravated rape. At his sentencing hearing, the victim of the third rape testified against him and identified him as her attacker. Wyatt was sentenced to 99 years in prison and was never prosecuted for the two other rapes.

After losing his appeals, Wyatt sought the assistance of the Innocence Project. At first officials at the crime lab, Southwest Institute of Forensic Sciences, said the evidence from the case was no longer available. But in November 2005, the lab said that a later search had produced the evidence, though it was partially degraded.

DNA testing was ordered on June 6, 2006. The testing produced a partial DNA profile that excluded Wyatt as the source of the DNA.

In the meantime, a joint investigation by the Innocence Project and the Dallas County District Attorney’s office turned up exculpatory evidence that was never turned over to Wyatt.

The evidence included that Wyatt was placed in a live line-up and the victim of the third attack was unable to identify him—until after she heard a police officer say that Wyatt had lost weight in recent weeks. The investigation showed the state had suppressed a fingerprint card from a May 20, 1980 arrest of Wyatt showing his weight as 135 pounds as well as a photograph from that arrest showing he had a mustache and other facial hair. The state also had suppressed a police report of the third rape in which the victim said her attacker weighed 200 pounds.

The investigation also disclosed that Wyatt’s trial attorney had failed to obtain records from January 13, 1981—just weeks after the first assault and days after the third—showing that Wyatt had been hospitalized and his weight was listed as 144 pounds. The records could have been used to discredit the police officer’s false testimony at trial that Wyatt said he had lost 30 pounds.

Wyatt’s trial attorney did not attempt to challenge the state’s scientific evidence until the first day of trial and did not consult and expert. A review of the scientific testimony at Wyatt’s trial by an expert for the Innocence Project showed that the testimony was false, scientifically inaccurate and misleading. A correct interpretation, according to the Innocence project expert, would have been that the results of the serology testing provided no information that could have been used to link Wyatt to the attack.

On January 4, 2012, based on a joint motion filed by Wyatt’s lawyers and the Dallas County District Attorney’s Office Conviction Integrity Unit, a Texas judge ordered Wyatt released from prison and recommended that his conviction be vacated.

On May 9, 2012, the Texas Court of Criminal Appeals vacated the conviction and the charges were dismissed.

In December 2014, at the request of the Dallas County District Attorney’s Office, a Dallas County judge entered a court order finding Wyatt officially innocent. Wyatt filed a federal civil rights lawsuit, but voluntarily dismissed it in 2015 after he was awarded $2,480,000 in state compensation plus a monthly annuity of $15,075.