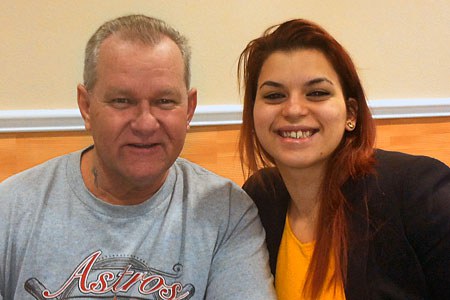 Randolph “Randy” Arledge was wrongfully convicted of a Corsicana, Texas, rape and murder based almost entirely on informant testimony. He was exonerated through DNA testing on May 3, 2013.

On August 30, 1981, 21-year-old Carolyn Armstrong was found on a dirt road off of Highway 22 in Navarro County. She was naked from the waist down with over 40 stab wounds to the neck and chest. Her abandoned car was found with the keys in the ignition several miles away. A black hair net and partially smoked joint were also found in the car.

Arledge was in Corsicana visiting family at the time of the crime but left the following day for his home in Houston. In Houston, he met up with Bennie Lamas and Paula Lucas and went on a road trip in a stolen van. The three were apprehended in Tennessee in connection with an armed robbery charge.

Pursuant to a plea deal, Lamas and Lucas testified at Arledge’s Texas murder trial that Arledge told them he had murdered a woman in Corsicana, Texas. In return, Lucas received favorable consideration at sentencing for the armed robbery and was given probation.

Despite a lack of physical evidence connecting Arledge to the crimes and alibi testimony from several witnesses, he was convicted of murder and sentenced to 99 years in prison.

In 2011, the Innocence Project secured DNA testing of the physical evidence with the cooperation of the Navarro County District Attorney’s Office. The testing, conducted by Cellmark Forensics, included hair samples from the hairnet and washings from the victim’s pubic hairs. Every item of evidence excluded Arledge, and a CODIS DNA database search revealed a match to felon David Sims.

Sims also pled “no contest” to the 1985 attempted murder of a Dallas woman who was stabbed over 90 times. At the time of this writing, he is the subject of a criminal investigation relating to the Armstrong murder.

On February 11, 2013, Judge James Lagomarsino and the Navarro County District Attorney’s Office agreed to release Arledge on bond during the process of overturning his conviction. (finding of actual innocence by a judge.) Arledge was officially exonerated by the Texas Court of Criminal Appeals on May 3, 2013, after more than 30 years behind bars, 14 of them for a murder that he did not commit.