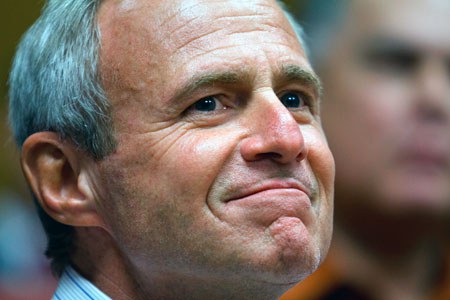 After spending nearly 25 years in prison for the murder of his wife, Morton was released on October 4, 2011, and officially exonerated in December 2011. DNA evidence implicated another man, who has also been tied to a similar Texas murder that occurred two years after the murder of Morton’s wife.

In 1986, Michael Morton was a supermarket manager in Texas and a husband and father. As he says of his family, “I’ve often felt how almost excruciatingly average we were, a chunk out of a demographic study: the house, the yard, the kid, the car. We had everything but the picket fence. It was good.”

Michael Morton’s life, however, took a horrific turn that same year: his wife was murdered in their bed, and he was convicted of that murder, despite any evidence pointing to his guilt and tremendous evidence showing his innocence.

After spending nearly 25 years in prison for the murder of his wife, Morton was released on October 4, 2011, and officially exonerated in December 2011. DNA evidence implicated another man, who has also been tied to a similar Texas murder that occurred two years after the murder of Morton’s wife.

In August 1986, Michael Morton celebrated his birthday at a restaurant with his wife, Christine, and their three-year-old son. The next morning, Morton left a note on the bathroom vanity expressing disappointment that his wife had declined to be intimate with him the night before, but ended the note with the words, “I love you.” He then left for work at about 5:30 a.m., arriving soon after.

Later that morning, Christine’s body was found in their bed. She had been bludgeoned to death with what appeared to have been a weapon made of wood. The sheets upon which she lay were stained with what was later determined to be semen.

The day after Christine’s body was found, police recovered a bloody bandana found at a construction site located about 100 yards from the Morton home.

Christine’s mother told the police that the Mortons’ son, Eric, had been present during the murder. Eric had told his grandmother that the murderer was not Michael but a “monster.” He described the crime scene and murder in detail, and specifically said that his “Daddy was not home” when the murder occurred.

Upon questioning the Mortons’ neighbors, police were told that a man had repeatedly parked a green van on the street behind the Mortons’ house and walked off into a nearby wooded area. Police records also indicated that Christine Morton’s missing credit card had possibly been recovered in a San Antonio, Texas jewelry store, and that a San Antonio officer stated that he could identify the woman who had attempted to use the card. According to Morton’s defense lawyers, none of this evidence was turned over to them at the trial.

When defense attorneys learned that the prosecution did not plan to call Sergeant Don Woods, the chief investigator in the case, to the stand, they suspected that the prosecution might be concealing potentially exculpatory evidence. The defense raised this concern with the trial judge, who ordered the prosecution to turn over all reports by Sergeant Woods so that he could conduct a thorough review. Evidence concerning Eric’s eyewitness account, the green van, and Christine Morton’s credit card were all absent from the records given to the judge.

The prosecution presented no witnesses or physical evidence that tied Morton to the crime, but they hypothesized that he had beaten Christine to death because she refused to have sex with him on his birthday.  On February 17, 1987, Michael Morton was convicted of murder and sentenced to life in prison.

In 2005, the Innocence Project and the law firm, Raley & Bowick, filed a motion requesting additional DNA testing on items of evidence from the crime scene. The court granted permission to test some of the items, excluding the bloody bandana found near the Mortons’ house. Once again, tests could not exclude Morton as the source of the DNA collected from the bed.

The unknown male DNA profile was run through the CODIS databank (a DNA database system) and matched Mark Norwood, a convicted felon from California, who had a criminal record in Texas and who lived in Texas at the time of Christine Morton’s murder. Further investigation by Morton’s lawyers and the Travis County District Attorney revealed that a hair from Norwood was also found at the scene of the murder of Debra Masters Baker in Travis County. Baker was, like Christine Morton, bludgeoned to death in her bed; her murder occurred two years after Christine’s death, while Michael Morton was in prison.

Michael Morton was released on October 4, 2011, after spending nearly 25 years in prison. He was officially exonerated on December 19, 2011.

“I’ve been out about five months now. I came out of the gym the other morning, and the sun was just over the horizon and there was orange and purple and a little bit of a breeze that was drying the perspiration on my forehead and it felt so good. I’ve been going to restaurants looking for things I have never eaten. I had crabmeat manicotti recently. It was delicious. My bad days are good.”

After his release, Michael Morton moved in with his parents in Liberty City, Texas, and later started renting a house in nearby Kilgore. In March 2013, he married Cynthia May Chessman, a member of the church he has attended since his exoneration, and they are happily living in Texas.

Prosecutorial Misconduct Finding: During the course of the post-conviction DNA litigation, Morton’s attorneys filed a Public Information Act request, and finally obtained the other documents showing Morton’s innocence in the prosecution’s file that had been withheld at trial. The Innocence Project filed a brief on Mr. Morton’s behalf and the Texas Supreme Court ordered an unprecedented Court of Inquiry to determine whether Ken Anderson, the former prosecutor who went on to become a judge, had committed misconduct.

The Court of Inquiry ruled there to be probable cause to believe Mr. Anderson had violated criminal laws by concealing evidence and charged him with criminal contempt and tampering with evidence for concealing the exculpatory information from the trial judge and Morton’s defense team. The State Bar of Texas also brought ethics charges against Mr. Anderson. In early November 2013, Mr. Anderson entered a plea to criminal contempt and agreed to serve a 10-day jail sentence. He resigned from his position as a district court judge and permanently surrendered his law license.