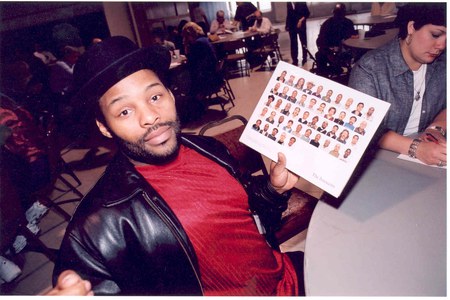 On June 22, 1988, Michael Green was indicted by the grand jury of Cuyahoga County, Ohio, for one count of rape and one count of aggravated robbery. A jury trial commenced on October 13, 1988, and on October 21, 1988, Green was found guilty on both counts. The conviction was based almost exclusively on the eyewitness identification made by the victim. On October 21, 1988, the trial court sentenced Green to consecutive prison terms of ten to twenty-five years for the rape offense and ten to twenty-five years for the aggravated robbery offense.

The victim, a Caucasian woman, was attacked in her room at the Cleveland Clinic Inn, where she was staying following cancer treatment at the Cleveland Clinic Hospital. On the night of the crime, she had responded to a knock at her door. When she opened the door, a hand reached inside and grabbed her by the throat. The assailant held a knife near her face, pushed her into the room, and demanded money from her. After the victim gave him some money, the perpetrator ordered her to sit on the bed and to undress. The assailant then told her to put her clothing back on and went toward the door. After he arrived at the door, however, the assailant walked back over to the victim and ordered her to undress again. He pushed the victim onto the bed and raped her. After ejaculating, the assailant grabbed a washcloth from the bathroom and cleaned his penis. The assailant then threw the washcloth on the floor and left the room. The victim testified at trial that the perpetrator said his name was Tony during the attack.

Immediately after the attack, the victim went to the bathroom two times, squatted in the tub, and washed her vagina with soap. She then attempted to reach the Rape Crisis Center, but her call went unanswered. Approximately an hour and a half after the perpetrator left her room, the victim called the Cleveland Clinic security, who notified the Cleveland Police Department, and both agencies responded to the scene. The victim’s initial description of the assailant was an African American male, around twenty-three years old, 5’8″, 165 pounds, medium build, brown eyes, black short afro, pock-marked face with pimples, wearing a black ski cap type hat and a “doo rag”, a black t-shirt with cut-off sleeves, and gray pleated pants.

The police collected the washcloth and brought the victim to Mount Sinai Medical Center, where a rape kit was prepared and pubic hair samples were collected. Green, a former employee of the Cleveland Clinic, became a suspect in this case after a Cleveland Clinic security officer recognized the description given by the victim. A few days after the attack, the victim was shown a photo array which depicted young African-American males and included Green’s former work identification photograph. After viewing this first array, the victim stated that she saw one person “that resembled [her] attacker, but just not enough.” The following day, she was shown a photo array which was comprised of booking photographs. Green’s photograph was the only photograph repeated in both arrays. The booking photographs contained biographical placards on them, including the subject’s height, weight, and age. The card on Green’s photograph gave a height, weight, and age description that matched the description given by the victim to the police. She identified Green as her assailant from this second photo array. Approximately one week after the crime, Green learned that he was wanted in connection with this investigation and went voluntarily to speak with Cleveland Clinic security.

At trial, the prosecution’s case hinged on the cross-racial identification made by the victim, as well as serological testing of the washcloth that the assailant had used to wipe his penis following intercourse. The prosecution introduced the washcloth into evidence and relied on the testimony of a civilian scientific examiner for the Cleveland Police Department Forensic Laboratory to establish Green’s identity as the assailant.

Specifically, the examiner testified that he examined the washcloth and conducted acid phosphotase and P-30 tests that revealed the presence of seminal fluid. He then performed conventional serological testing on the biological evidence. Results revealed that both Green and the victim are type B secretors. The examiner went further and testified that he was able to determine, with scientific certainty, that the donor of the seminal fluid was a type B secretor, including Green as a source of the seminal fluid, though serological testing could not allow him to separate the victim’s profile from the assailant’s. He also testified that eighty-four percent of the male population would be unable to deposit the seminal fluid on the washcloth.

In 1997, Michael Green contacted the Innocence Project and requested assistance with challenging his conviction. Green insisted that he was innocent and that DNA testing would exonerate him. With the help of Green’s father, Robert Mandell, the relevant evidence was located and the Innocence Project ultimately negotiated the release of the evidence for DNA testing. On May 22, 2001, Judge Anthony O. Calabrese Jr. granted Green’s motion, a Stipulation For Release of Evidence For Purposes of Scientific Testing, which was signed by Innocence Project attorneys, local counsel, and the Assistant Cuyahoga County Prosecuting Attorney.

On July 9, 2001, the washcloth collected from the victim’s room at the Cleveland Clinic Inn was received by Dr. Edward Blake, of Forensic Science Associates. A large stained area on the washcloth had been marked and sampled in three areas during the original evidence examination at the Cleveland Police Department Forensic Laboratory. Dr. Blake selected five discolored areas within the marked stain for examination and removed a small portion of fabric from each of these stained areas.

The DNA from the spermatozoa recovered from these five areas eliminated Michael Green as the source of the spermatozoa found on the washcloth. Aside from the DNA results, the Forensic Science Associates report detailed the ways in which the state’s expert’s testimony at trial was scientifically irresponsible and misleading to the jury. The victim had reported that the assailant ejaculated during vaginal intercourse and then wiped off his genitals with a washcloth. Thus, “this scenario painted a clear expectation for the presence of semen commingled with [the victim’s] vaginal secretions on the washcloth,” according to Blake. In his trial testimony, the state’s expert gave the impression that the semen stain on the washcloth was a neat semen stain rather than a semen stain commingled with the vaginal secretions of the victim, though he knew or should have known the opposite to be true. He had also given a sixteen percent figure for how many people out of the population were possible contributors of the stains. Since Green and the victim are B secretors, any B or O secretor, or a nonsecretor of any blood type, could have deposited the sample.

Anthony Michael Green was released on October 09, 2001, and exonerated based on postconviction DNA test results on October 18, 2001. He had been wrongfully incarcerated for thirteen years.

Since his release, the real perpetrator of this crime has confessed and was convicted. In June 2004, Green reached a settlement with the city of Cleveland. The city agreed not only to compensate him, but to create and conduct the “Anthony Michael Green Forensic Laboratory Audit” of the city police laboratory. The audit hopes to address the causes of faulty and falsified forensics, which played a large part in Green’s conviction. Green hopes that this audit will help others who, like himself, were wrongfully incarcerated on the basis of false scientific evidence.