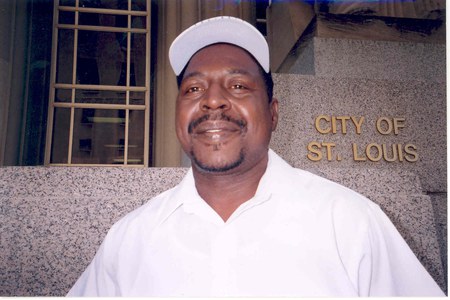 On August 25, 2003, Lonnie Erby won his 17-year fight to prove his innocence and became the 136th person in the United States to be exonerated by post-conviction DNA testing. The state of Missouri wrongfully convicted Lonnie Erby in 1986 and sentenced him to serve 115 years in prison for crimes he did not commit. After 17 years in a Missouri prison and as many years fighting to prove his innocence, Lonnie Erby was exonerated and, finally, regained his freedom.

In the mid-morning of July 26, 1985, a teenage girl was walking on St. Louis Avenue in St. Louis, Missouri, when she was accosted by a man who emerged from a gray car brandishing a knife. Grasping her by the throat, the man threatened to kill her if she attempted to escape. He led her down a nearby alleyway to an unoccupied garage where he forced her to undress. After the victim was vaginally and orally raped the attacker fled. The young victim dressed hurriedly and ran to her home to notify the authorities. Shortly after her assault, she was taken to the hospital where staff collected a rape kit to preserve evidence from the assault. The police also collected the victim’s shirt, jeans, and underwear. This incident was the first of a series of rapes and robberies that plagued the city of St. Louis between August and October of 1985.

On August 22, a 14-year-old girl was taking out trash when an unknown man started to run towards her. He chased her until he was able to tackle her to the ground and began forcibly removing her clothing. The perpetrator sexually assaulted her while yelling expletives at her. After the rape and departure of the attacker, the victim returned to her home, took a bath, and notified her mother and the police. The police were unable to obtain biological evidence from this attack due to the victim taking a bath immediately after the assault.

On September 30, two teenage girls were walking on a St. Louis street when a man carrying a handgun confronted them. He demanded all their money and, after taking $15, he forced the victims to walk up an alleyway to a vacant lot. At gunpoint, he made both victims stand against a tree and began forcibly removing one of the victim’s clothing, all the while cursing at them. The same victim attempted to resist the assailant and was beaten with the handgun. The other victim used this opportunity to flee from the attacker, enabling both teenagers to escape.

On October 1, a teenage girl was assaulted as she walked to her cousin’s house in the early morning. The attacker approached from behind and threatened the girl with a knife. He forced her into a vacant house where he orally and vaginally raped her. He then left the building with the victim’s money and cigarette lighter. The victim dressed hurriedly and sought help from a neighboring school. She was taken to the hospital where a rape kit was collected.

Three days later, police responded to a complaint involving a man looking into the bedroom window of a young girl. In their search of the area, police spotted Lonnie Erby walking in the vicinity and arrested him for the October 1st assault. In the following week, four of the five victims identified Erby as their attacker through photographic and physical lineups.

At Erby’s trial, the prosecution used similarities in the proximity of the assaults, the modus operandi of the crimes, and the age of the victims to prove that these crimes were committed by the same individual. Prosecutors bolstered their argument with the victims’ pre-trial identifications of Erby and the consistent descriptions given by the victims to the police after each assault. There was no physical evidence definitively linking Erby to the crime, but a forensic analyst testified that semen was identified in the rape kit collected from the victim after the crime. Serology testing showed that the victim and Erby shared the same blood group markers, which were also consistent with the crime scene evidence.The analyst testified incorrectly that these results could exclude 50% of the male population as possible perpetrators. When the evidence being tested is a mixed stain of semen from the perpetrator and vaginal secretions from the victim – and testing does not detect blood group substance or enzymes foreign to the victim – no potential semen donor can be excluded because the victim’s blood group markers could be “masking” the perpetrator’s. Under such circumstances, the failure to inform the jury that 100% of the male population could be included and that none can be excluded is highly misleading.

The defense did not challenge that the assaults occurred, but asserted that Erby had been mistakenly identified and presented alibi defense. Despite the testimony of multiple witnesses placing him in other locations during the assaults, Erby was convicted of multiple counts of kidnapping, armed criminal action, forcible rape, forcible sodomy, and stealing. Erby was acquitted of all charges resulting from the September 30th assault of the two teenage victims.

In 1995, the Innocence Project began working on Erby’s case. For six years, the Innocence Project sought consent to testing from the St. Louis Circuit Attorney’s Office. When this effort proved fruitless, the Innocence Project and Erby brought a Section 1983 civil rights action seeking access to the biological evidence. Later that year, Missouri enacted its first post-conviction DNA statute. In November of 2001, the Innocence Project, on behalf of Erby, filed under the statute for access to the biological evidence in his case. In April 2002, the Missouri Circuit Court finally ordered testing to be conducted. The Circuit Attorney’s Office appealed the Court’s decision to allow post-conviction testing but later withdrew its appeal. In August of 2003, Forensic Science Associates and the St. Louis Police Laboratory excluded Mr. Erby from the biological evidence left by the perpetrators of the July 26th and October 1st assaults. These results conclusively proved that Lonnie Erby could not have committed these crimes.

On August 25, 2003, Lonnie Erby won his 17-year fight to prove his innocence and became the 136th person in the United States to be exonerated by post-conviction DNA testing. The state of Missouri wrongfully convicted Lonnie Erby in 1986 and sentenced him to serve 115 years in prison for crimes he did not commit. After 17 years in a Missouri prison and as many years fighting to prove his innocence, Lonnie Erby was exonerated and, finally, regained his freedom.

In 2011, the DNA from the biological evidence was matched to that of Johnnie Moore, who was convicted in 1976 in Illinois of three attacks on women. After he was released from prison, he moved to St. Louis in 1984. He was convicted of a knife attack in 1986, which led to his DNA profile being entered into the FBI DNA database and ultimately to the match with the DNA from the rapes.