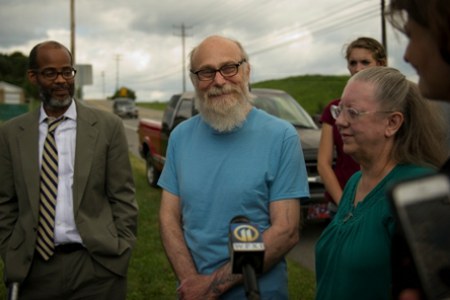 On July 31, 1976, a man picking blackberries discovered the partially-clad body of 15-year-old Deann Katherine Long in the woods near her home in Indiana County, Pennsylvania.

An autopsy revealed that Long had been raped and shot once in the back of the head—not at close range, suggesting she may have been trying to flee when killed.

The victim was last seen the previous afternoon when, as she was walking home, a blue car stopped and she got in. Long’s younger sister, Lola, told police that Long got in the car after the driver said that Long’s brother had been in a car wreck nearby. Long’s older sister, Patty, as well as Patty’s friend, Patty Lydick, told police that they were out and by the time they got to the house, Long was already gone.

The driver of the car was described by Long’s sister, Lola, as a man with black hair, a heavy mustache, straight sideburns that came down just below his ears, between 20 and 30 years old. Police publicized a composite sketch based on that description.

Nearly a year later, on July 2, 1977, police questioned Elderkin a third time. This time, he said that he went to a party on the day of the murder and was high on drugs, but remembered parts of the evening, including a girl being in the backseat of a car he was riding in. He said he remembered that at some point, he looked out of the windshield and saw a girl running, and that he then heard a shot and saw the girl fall to the ground. Elderkin identified the gunman as Larry Wolover, but police did not believe him and Wolover was never charged.

The crime went unsolved for nearly four years. In February 1981, police learned that Elderkin had attempted to admit himself to a psychiatric facility, saying he was experiencing recurring dreams about the murder. On February 22, 1981, Elderkin gave yet another statement about the crime, saying that a man named John Lynch had held the victim down while another man named Joe Recesky raped her. Elderkin said Recesky grabbed a rifle from the car and shot three times at Long, striking her in the head with the final shot.

On March 16, 1981, the case took a dramatic turn when a college professor who was an amateur hypnotist with no formal training hypnotized Elderkin. During this session, Elderkin—in his fifth different statement about the killing—said that he left a party in a car with 28-year-old Lewis Fogle and Fogle’s brother, Dennis. Elderkin said he was feeling ill from the effects of a day-long drinking binge and recalled that the Fogle brothers drove to the victim’s house, picked her up and drove to the woods.

Police then re-interviewed the victim’s sisters and the friend, Patty Lydick. Lola maintained her original story–that she saw Long get in the car with the man. But Long’s older sister, Patty, and the friend, Patty Lydick, changed their statements to dovetail with Elderkin’s statement. They now said they were home and so was Long when when she got picked up by three men—in contrast to their statements five years earlier when they said Long was already gone when they got home.

Long’s sister, Patty also now said that the Long came home and they had a dinner of spaghetti and meatballs with salad before leaving with the three men—although the autopsy showed no such food in the victim’s stomach.

On March 19, 1981, police picked up Dennis Fogle and questioned him, and eventually obtained a confession that matched Elderkin’s statement almost exactly. As a result, Lewis Fogle was arrested, as were Lynch and Recesky. All were charged with murder and rape. Fogle’s physical appearance at the time of the crime—verified through photographs—differed greatly from the original description. He had red hair, not black, and he had a full beard, not just a mustache.

By the time Lewis Fogle went to trial in Indiana County Court of Common Pleas in February 1982, three men who were in the jail with Fogle had come forward to testify that Fogle confessed to the rape and murder. There was no forensic or physical evidence linking Fogle to the crime.

The trial judge excluded Elderkin’s statement from evidence because the hypnotist who obtained it was untrained, made no written record of information given to him by the police prior to the session, made no record of what Elderkin remembered before he was hypnotized, and the session itself was not recorded. The judge noted that Elderkin had given inconsistent statements over the years and was a patient in a psychiatric ward. The judge also noted that after Elderkin’s hypnotic statement, statements by other witnesses began to shift to support Elderkin’s new version, suggesting that those witnesses were being coached or coerced.

Fogle denied any involvement in the crime and said he spent the day with his parents and his brother, until 10 p.m. when they went to a bar. Fogle’s parents testified and supported his testimony.

Patty Lydick admitted she had changed her version of events so that it agreed with Elderkin’s last statement. She said she changed her statement because the state police “pressured me and I wanted to go home…they told me that’s the way it was supposed to be.”

On February 26, 1982, the jury convicted Fogle of second-degree murder and rape. Fogle, who had been married for three months before he was arrested, was sentenced to life in prison without parole.

The prosecution later dismissed the charges against Dennis Fogle, Lynch and Recesky for insufficient evidence.

In 2014, a search for new evidence for possible DNA testing located 12 additional items, including the victim’s pubic hair combings. In the spring of 2015, sperm cells were identified and testing revealed the DNA profile of an unknown male that was not Lewis Fogle’s.

In August 2015, the prosecution joined with lawyers for Fogle in a motion to vacate Fogle’s convictions. On August 13, 2015, the motion was granted and Fogle was released on bond. Fogle was greeted by his wife, Deb, who had staunchly supported his innocence for more than 34 years.