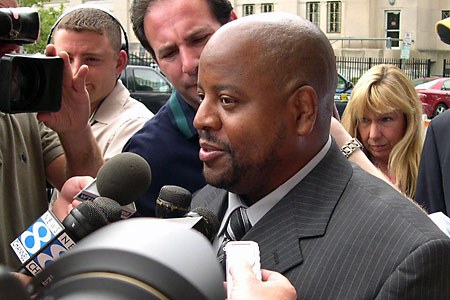 After being released from prison on June 6, 2006, James Calvin Tillman was officially exonerated by DNA testing on July 11, 2006. With the assistance of the Connecticut Innocence Project, a voluntary organization and part of the Public Defender Services for the State of Connecticut, Tillman walked out of prison after serving 16 years on a rape and kidnapping conviction.

The Crime
In the early morning hours of January 22, 1988, the 26-year-old victim was warming up her car in a parking lot in Hartford when a stranger pushed his way into her car. He drove her to a secluded spot where he beat her, robbed her of money and jewelry, and raped her. The attacker then drove to a different location and ran off.

The Biological Evidence
Semen was found on the victim’s pantyhose and dress. A forensic analyst testified that serological testing  showed that the semen could have come from Tillman and about 20 percent of the male population. The analyst failed to note the possibility of degradation, however, which would have changed the results. A rape kit had been collected at the hospital after the crime, but the samples in the kit were not tested at the time of trial.

The Defense
Tillman steadfastly maintained his innocence but was convicted, after a jury trial, of all charges on September 19, 1989. The conviction was based almost entirely upon the eyewitness identification of the victim, a white woman who was unknown to Tillman, an African-American man.

Post-Conviction
In 1990, Tillman arranged to have stains from the woman’s pantyhose and dress tested, but DNA testing at the time was not advanced enough to get a conclusive result.

In 2005, the Connecticut Innocence Project, with attorneys Karen Goodrow and Brian Carlow, took on Tillman’s case. More advanced DNA testing was performed on the crotch sample of the victim’s pantyhose and on multiple semen stains on the victim’s dress. The victim’s husband was excluded from the semen stains. Most importantly, Tillman was also excluded from all of the semen samples and all of the samples matched one another, meaning the semen was from a single source. On June 6, 2006, Tillman’s conviction was vacated after the Superior Court granted a petition for a new trial based on DNA evidence. Tillman was released without bail.

Further DNA testing was performed on one more stain on the dress, which also originated from the source on the other stains. On July 11, 2006, the charges against Tillman were dropped and James Calvin Tillman was exonerated after spending more than 16 years in prison for a crime he did not commit.