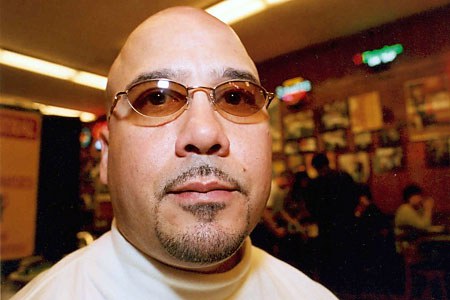 On November 23, 1988, Eduardo Velasquez, charged under the name Angel Hernandez, was convicted by a jury of assault and battery by means of a dangerous weapon, indecent assault, battery on an adult, aggravated rape, and assault and battery. His conviction was affirmed on August 12, 1991.

At about 7:30PM on December 9, 1987, the victim was assaulted as she entered her car, parked on Springfield Avenue in Chicopee. As she opened her car door, she heard a someone behind her and turned to see a man rushing towards her, who then pushed her into her car. The victim was forced to perform fellatio while a knife was held against her back. The assailant ejaculated over her face, hair, and coat. He then looked out the window for about thirty seconds while attempting to pull up his clothing, opened the car door, and fled. The entire incident lasted about twenty minutes.

The victim ran to a nearby convent. The door was opened by a nun, who called the campus police (the convent is located on the campus of a college). The victim gave the police a description of the assailant that was subsequently broadcast over police radio.

At about 8:15PM on the same night, two officers were driving on Stonia Drive in Chicopee. They claimed to see Velasquez standing in the road with his pants open and down about his knees, adjusting his shirt. The officers went to question him and, during that time, they heard over the radio a description of an assailant wanted in connection with a sexual assault. Noticing that Velasquez fit the general description of the assailant, the police asked him if he would go to the scene for an identification procedure, to which he consented. The officers drove Velasquez to the convent, where he stood on the porch while the victim viewed him through the glass and screen front doors of the convent. She stood behind two police officers and viewed Velasquez from between their shoulders and peering through a curtain. The victim was ten to twelve feet from him. She stated that he looked like her assailant, but she couldn’t be sure. She then asked Velasquez to speak. Upon hearing his voice, she identified him as her assailant. The victim then asked to see his gloves to be sure. They were passed through the door and shown to the victim. She then said that she was certain that Velasquez was her assailant.

At trial, the defense claimed that Velasquez was mistakenly identified. The police had taken blood, saliva samples, head and pubic hair samples, scrapings from under his fingernails, and a penile swab. The victim was taken to a hospital and samples were collected from her, including oral swabs, rectal swabs, vaginal swabs, clothing, pubic hair combings, and head hair combings. The samples contained spermatazoa, which was tested for blood type and PGM enzymes. The results showed that Velazquez’s blood type and PGM type matched the evidence from the crime scene. The lab expert testified about these findings and told the jury that 11 percent of the Hispanic population shares this blood and PGM type.

The lab expert also testified that he found a dark black pubic hair unlike those of the victim but “within the range of the. . . submitted known pubic hairs” of Velasquez. Another pubic hair was found on the victim’s slip that was unlike the victim’s hair but was “within the range” of Velasquez’s hair samples. Because there is not adequate empirical data on the frequency of various class characteristics in human hair, an analyst’s assertion that hairs are “within a range” is inherently prejudicial and lacks probative value.

Eduardo Velasquez spent thirteen years in prison for a crime he did not commit.