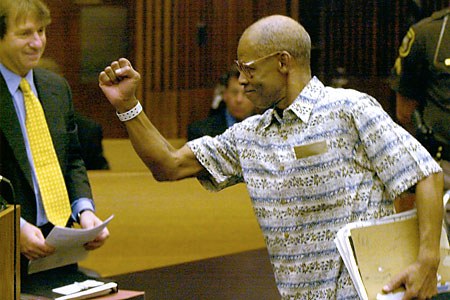 Innocence Project client Eddie Joe Lloyd served 17 years in Michigan prison for a murder and rape he didn’t commit before DNA testing proved his innocence and led to his release in 2002.

Lloyd was convicted of a brutal 1984 murder of a sixteen-year-old girl in Detroit, Michigan. While in a hospital receiving treatment for his mental illness, Lloyd wrote to police with suggestions on how to solve various murders, including the murder for which he was convicted. Police officers visited and interrogated him several times in the hospital. During the course of these interrogations, police officers allowed Lloyd to believe that, by confessing and getting arrested, he would help them “smoke out” the real perpetrator. They fed him details that he could not have known, including the location of the body, the type of jeans the victim was wearing, a description of earrings the victim wore, and other details from the crime scene. Lloyd signed a written confession and gave a tape recorded statement as well.

At trial, the prosecution played the confession to the jury and claimed that Lloyd had killed the victim in order to get away with the rape. The forensic evidence consisted a semen stain on longjohns used to strangle the victim and a bottle that was forced into the victim, and a piece of paper with a semen stain that was stuck to the bottle. The only testing presented at trial consisted of confirming the presence of semen and other biological matter.

Lloyd was represented during pre-trial by a court-appointed attorney who received $150 for pre-trial preparation and investigation. This attorney gave $50 of this to a convicted felon, who conducted no investigation into Lloyd’s mental state or confession.

This lawyer withdrew from the case eight days before trial, but another attorney was appointed and the trial was not postponed. The trial attorney did not meet with the pre-trial attorney. He did not question the details of the investigation and did not cross-examine the police officer most directly involved in the coerced confession. He called no defense witnesses and gave a five minute closing argument. The jury deliberated for less than an hour before convicting him of first degree felony murder in May 1985.

Lloyd’s attorney lamented in the press that his client would not permit an insanity defense, saying, “With a psychiatric plea, we might have had a chance. If he’s not goofy, there’s not a dog in Texas.” Lloyd insisted that, despite his mental illness, he was innocent.

At the time of sentencing, Judge Leonard Townsend complained that the court’s hands were tied since he could only sentence Lloyd to life imprisonment rather than what he believed was the “only justifiable sentence,” which was “termination by extreme con[striction]” (i.e. hanging). With regard to Michigan’s repeal of the death penalty, Townsend added, “And on account of this case, a lot of people who had reservations about capital punishment have been convinced that they should jump over the fence and sign petitions. The sentence the statute requires is inadequate. I cannot impose the sentence that the facts call for in this matter.”

When asked if he had anything to say, Lloyd answered, “Into each life tears must fall. That means on both sides. MJ [the victim] had a right to live, as we all do…she said goodbye…and disappeared in the darkness never to be seen again alive. One day later she was found in a vacant garage. Cold, alone, and lifeless…Eddie Lloyd was focused on as a suspect while he was a mental patient and somewhere along the line was he was charged and convicted of the crime, a heinous crime, brutal. What I want to say to the court is that, to the family, MJ, to the city of Detroit, to everybody who was involved with the case, I did not kill MJ. I never killed anybody in my life and I wouldn’t.”

An attorney appointed to file Lloyd’s direct appeal did not visit Lloyd in prison or raise a claim of ineffective assistance of counsel. Lloyd wrote to the court saying his appellate assistance was lacking, and the appellate attorney wrote that Lloyd should not be taken seriously because he was “guilty and should die.”
All of Lloyd’s appeals failed. Lloyd contacted the Innocence Project in 1995, seeking assistance in having the biological evidence subjected to DNA testing. For years, Project students searched for the evidence. Finally, a number of evidence items were found with assistance from the Wayne County Prosecuting Attorney’s Office.

DNA testing conducted by Forensic Science Associates, and confirmed by the Michigan State Crime Lab, found the same unknown male profile from sperm cells on the broken glass bottle, the piece of paper, the stain on the longjohns, and samples collected from the victim’s body during the autopsy. Each of these profiles excluded Eddie Joe Lloyd.

He was exonerated and released on August 26, 2002, after serving 17 years in prison for a rape and murder he didn’t commit. Sadly, he passed away just two years later.