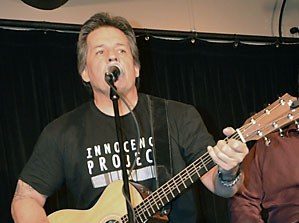 In July 1981, a 74-year-old woman was attacked while sleeping in her home in Ogden, Kansas. The assailant covered her face with his hand and bed clothing. As the victim struggled, she was struck repeatedly on the head, causing her to bleed. The attacker then raped her and fled. The victim contacted the police and was taken to a hospital, where she was treated for her injuries and a rape kit was collected.

In the early morning hours of the same day, 22-year-old Eddie James Lowery, a soldier stationed at Fort Riley, was involved in a traffic accident near the victim’s house. Investigators began questioning him that morning. He was questioned all day without food and was told he did not need a lawyer although he requested one. Investigators supplied Lowery with details of the crime – the house, the manner of entry, the weapon, and specifics about the rape. These details were eventually incorporated into his confession.

Although Lowery recanted the statements and his attorney filed a motion to suppress them, the court ruled that the confession was made voluntarily and allowed it into the trial. The confession became the cornerstone of the prosecution’s case.

The items collected from the victim included a rape kit, bedding, and a nightgown. A shirt and a pair of pants were collected from Lowery. Blood samples were used to determine the blood types of the victim and Lowery. At trial, serologist Mary Cortese, of the Kansas Bureau of Investigation, testified that blood and seminal fluid was found on several items taken from the victim. The blood on the items was determined to be type A and consistent with the victim. The seminal fluid was determined to be type O which was consistent with Lowery’s blood sample and blood found on his pants. Cortese testified that 48% of the general population has type O blood. The laboratory never did testing to determine if Lowery was a secretor, meaning Lowery’s blood type would be found in other biological fluids besides blood, like seminal fluid or saliva. Secretor testing was done for the victim. Cortese assumed that Lowery was a secretor, multiplied the 48% blood type O frequency by the 80% frequency of secretors in the population, and testified that 38.4% of the general population would have given the same results on these tests. But without testing an oral swab from Lowery, Cortese would not have known if Lowery’s blood type would be seen in other biological fluids besides blood. Therefore any testimony that implied or suggested Lowery was responsible for the seminal fluid found in the evidence was misleading and a gross overstatement. The 38.4% statistic that was given as an estimate of the number of people in the population who could give the same result would not have applied to someone who was not a secretor.

Lowery’s first trial ended in a hung jury. He was tried again in January 1982. This time the jury convicted him of rape, aggravated burglary, and aggravated battery. Lowery was sentenced to 11 years to life in prison. He served nine years of that sentence and was released on parole in 1991.

Through his attorney, Barry Clark, and with his own money, Lowery was able to procure DNA testing on the biological evidence in 2002. He had been forced to register as a sex offender every year since his parole and wanted to clear his name and reputation. Clark requested an evidence search, which turned up biological evidence from the investigation, including swabs from the rape kit, portions of the bedding, and portions of the victim’s nightgown. In September 2002, DNA test results confirmed Lowery’s claim of innocence. The semen found on the victim’s bedding originated from the same person as the semen found on the vaginal swabs. Lowery was excluded from being the contributor.

In April 2003, the District Court of Riley County, Kansas, vacated the judgment and conviction based on these results and the prosecution dismissed the case.

In 2011, Daniel Brewer pled guilty to the rape for which Lowery was wrongly convicted as well as another rape committed around the same time. Brewer was linked to the crimes by the DNA profile from the attack.