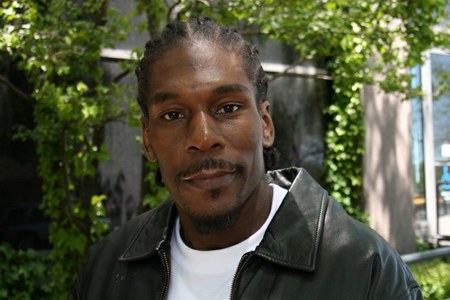 Innocence Project client Dean Cage served nearly 12 years in Illinois prison – and two years in jail awaiting trial – before he was released and exonerated due to DNA evidence that he didn’t commit the 1994 rape for which he was serving a 40-year sentence.

The Crime
On November 14, 1994, a 15-year-old Chicago girl missed her 6:20 a.m. bus to high school and began walking to the subway. It was dark outside, and the girl noticed an African-American man approaching her. He was wearing a black leather jacket and a distinctive hat with a snap. Seconds later, the man punched her in the eye and dragged her to the back porch of a nearby house. Once there, the man sexually assaulted the girl. He then forced her to rub dirt on her body, and he fled the area. The victim ran to a newspaper vendor and called police. Officers responded and took her to the hospital. Her clothes had been torn in the attack and she was only wearing her winter coat when transported to the hospital.

The Investigation
The victim was examined at a hospital and a rape kit was collected including her clothing and swabs of her body. No sperm cells were identified in an initial examination of the swabs. The victim gave a visual description of her attacker to police, saying he was an African-American man between 25 and 30 years old, about six feet tall, with a beard. The next day she helped officers create a sketch of the perpetrator.

The drawing was circulated in the community, and about a week later police received a tip that a man matching the sketch worked at a local meat market. Police took the victim to the market, where she was asked if the perpetrator was among the employees. She identified Dean Cage as the attacker. Officers then conducted another lineup at the police station, where the victim identified Cage by the sound of his voice. The same detective who ran the investigation of the rape also handled the eyewitness identification procedures. Cage was arrested on November 19, 1994.

The Trial
For two years after his arrest, Cage awaited trial in a Cook County jail cell. A bench trial before Cook County Circuit Court Judge Michael Bolan started on October 21, 1996. The victim testified that she was 100% sure Dean Cage was the perpetrator, pointing at him in court and saying, “He raped me.” Cage testified that he did not commit this crime and was with his fiancé at the time of the crime. His fiancé also testified that they were together at the time of the crime. The judge convicted Cage and sentenced him to 40 years in prison.

Post-Conviction Appeals
Cage claimed innocence throughout his 14-year ordeal. He filed several appeals, but for years he was rejected at every turn. In 2005, the Innocence Project accepted his case and began to seek DNA tests on evidence from the crime scene. An evidence search uncovered the rape kit, including swabs collected from the victim at the hospital, and the victim’s clothing. In 2006, the Cook County State Attorney’s Office agreed to conduct DNA testing in the case, and testing revealed that there were skin cells from a male contributor on this evidence. Sensitive Y-STR DNA testing was conducted on the evidence, isolating the profile of the male source. The same male DNA profile was discovered on both the victim’s clothing and the rape kit swab – and this profile did not match Cage, proving his innocence of the rape. He was released on May 27, 2008, after serving nearly 12 years in prison – and two years in jail – for a crime he didn’t commit. He reunited with a large, supportive family in Chicago.