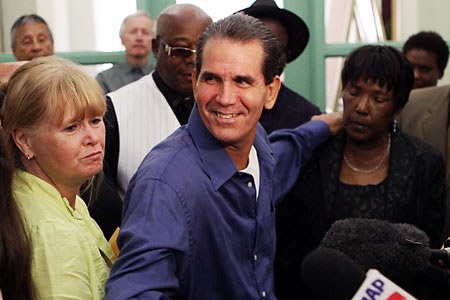 David Wiggins served 24 years of a life sentence for a crime he always maintained he didn’t commit. On October 12, 2012, Wiggins proved his innocence in the 1988 sexual assault of a 14-year-old girl based on new DNA evidence.

At around 10:15 a.m. on July 21, 1988, a 14-year-old girl in Fort Worth, Texas was at home alone during summer vacation. After she opened the back door to let her dog outside, an unknown male intruder knocked her to the floor. The perpetrator then turned the victim onto her back and put a towel over her face and his hand over her mouth while he proceeded to sexually assault and rape her. Throughout the encounter, the victim had an opportunity to view the perpetrator’s face at most three times, very briefly. The victim called 911 just a few minutes after the perpetrator left her house. When the police arrived, she gave a general description of her attacker as a white male who had very foul smelling body odor. Soon after the police arrived, she was taken by ambulance to the John Peter Smith Hospital where doctors collected a rape kit. Although fluid was collected from the victim, the Fort Worth Police Department Crime Laboratory did not conduct serological or DNA testing on the evidence because they concluded that the quantity of fluid collected was insufficient.

The Trial and Sentencing

Wiggins was arrested on July 23rd as a passenger in a stolen car. The victim was shown a photo array that included his photo. Next to his photograph, she wrote, “looks familiar.” She also noted that unlike the photograph of Wiggins, she recalled that the perpetrator’s “hair was combed” and “he looked neater.”

Wiggins was then placed in a live line-up and was selected by the victim. He was the only person in the lineup whose photograph was also included in the photo array. The victim also identified him as her attacker at trial. The prosecution produced no physical evidence connecting Wiggins to the crime. The only evidence other than the victim’s identification was the testimony of the driver of the stolen car and another witness who claimed that Wiggins told them that he had approached a house to burglarize it, but when he entered the house he saw a girl and ran away.

Prior to trial, Wiggins’ court-appointed attorney did not file any motions challenging the lineup procedures, nor did he seek any expert assistance to explain to the jury why the victim might have misidentified him. Wiggins himself filed a pro se, handwritten motion from jail to suppress the victim’s identification, but his attorney never followed up on the motion, and the court never held a hearing on the issue before or during the trial.

Additionally, Wiggins filed a pro se motion seeking DNA testing before the trial – this was also denied. During the trial, his attorney argued that Wiggins was misidentified and that the other two witnesses were motivated to lie. Among other incentives, both were on probation and were asked to testify by the prosecution. The jury rejected these arguments and convicted Wiggins on August 9, 1989, of sexual assault of a child. He was sentenced to life in prison.

Wiggins filed multiple unsuccessful pro se requests for DNA testing. He eventually sought the help of the Innocence Project, which accepted his case in 2007. With the cooperation of the Tarrant County District Attorney’s Office, the clothing that the victim was wearing during the crime was sent to a lab for DNA testing, which found sperm on the victim’s shorts (which she put on immediately after the assault) that does not match Wiggins. Since the victim had no prior sexual history, which was confirmed by the doctors who examined her, the Tarrant County prosecutor readily agreed that Wiggins was wrongly convicted.

Family members, friends and fellow exonerees joined Wiggins in court on August 24, 2012, to witness as the charges against him were vacated and he walked out of prison as a free man for the first time in 24 years. He was later officially exonerated on October 12, 2012.

Charge: Sexual Assault of a Child

Conviction: Sexual Assault of a Child