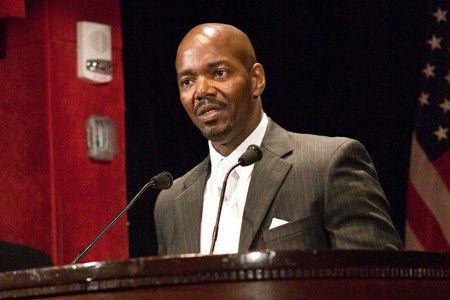 Cornelius Dupree was exonerated on April 4, 2011, after spending more than 30 years in prison for a rape and robbery he didn’t commit.

On November 23, 1979, a young couple stopped at a Dallas liquor store to purchase cigarettes. The 26-year old female stayed outside while her male friend entered the store. As she used a nearby payphone, she noticed two African-American men approaching the payphone next to her. Upon returning to the vehicle, her friend was held at gunpoint by one of the men and forced into the driver’s seat as the gunman climbed into the backseat. The second gunman forcibly entered the passenger seat alongside the female victim. The male was ordered to drive on the highway while the perpetrators robbed both victims of their money. Shortly afterward, they commanded the male victim to pull off the highway and exit the vehicle. At that moment, the female attempted to escape but failed as one of the perpetrators pulled her back into the vehicle.

The perpetrators stopped in a nearby park and each raped the female victim as the other one held her at gunpoint. After the rapes were committed, they allowed her to leave the vehicle and threatened to kill her if she went to the police. They also stole her rabbit-fur coat. The victim fled to the closest road and collapsed unconscious on the shoulder. A passing patrol car spotted her and the officer revived her and brought her to meet the male victim at the police station.

Exactly one week after the attack, Cornelius Dupree and Anthony Massingill were stopped by police as they walked along a street near the site of the incident. Police claimed they stopped them because they fit the general description of two other black men who were suspected in a separate sexual assault case. Both men were searched and although Dupree was unarmed, Massingill had a handgun roughly similar to the one described in the recent attack.

Both Dupree and Massingill were taken into custody and their photos were submitted for an identification lineup. Although the male victim did not identify them in the photo array, the female victim picked both Dupree and Massingill when presented with the same photos. Later in the investigation, police showed the photos to two women who worked at the store where the perpetrators tried to sell the fur coat, and both women did not identify either Massingill or Dupree.

Forensic analysts collected evidence from the victim’s rape kit examination, including vaginal swabs, pubic hair combings, pubic hair cuttings, and blood reference samples. The Southwest Institute of Forensic Sciences (SWIFS) in Dallas reported finding spermatozoa in the vaginal smear slide provided by the victim, indicating the presence of semen and confirming the victim’s recollection that one or both attackers had ejaculated during the rape. The ABO blood type found in the samples matched the blood type of the victim and therefore analysts
could not determine the perpetrators’ blood types from the serology tests.

At trial, both victims identified Dupree and Massingill as the perpetrators; the male victim explained his failure to previously identify either man by claiming that his vision was slightly impaired during his initial identification. Significantly, during the female victim’s cross examination in the identification hearing, she misidentified a photo of Massingill as Dupree, despite the fact that both defendants were present in the courtroom at the time. Additionally, at the time of the attack, the victim was not wearing her usual prescription glasses to correct her nearsightedness.

The prosecutor argued the case based on the photo identification of both victims. Dupree’s testimony relied on the cross-racial misidentification defense and his assertion that he was not involved in the crime or the attempted sale of the victim’s coat.

On April 3, 1980, the jury found Cornelius Dupree guilty of aggravated robbery and sentenced him to 75 years in prison. After this conviction, the prosecutor filed a Motion to Dismiss Prosecution on the rape charges because according to the State, a rape conviction would not have increased his sentence and continuing the trial would be unnecessarily expensive.

Dupree filed three petitions for a writ of habeas corpus and each time he was denied a new trial. He was never eligible for parole because he would have had to admit his guilt and enroll in a sex offender program, something he adamantly refused to do.

In 2006, the Dallas County District Attorney’s office cooperated with the Innocence Project and conducted a search for the physical evidence presented in Dupree’s trial. A year later, the forensics lab informed the DA’s office that they were only able to recover the victim’s pubic hair combings and cuttings; evidence from the vaginal swabs and other samples had been lost or destroyed. In 2009, the District Attorney’s Office agreed to permit the Innocence Project to conduct DNA testing and the remaining evidence was sent to the Forensic Science Associates lab in California.

The lab discovered a large quantity of sperm cells on fluid that remained on the pubic hair cuttings, and performed STR-DNA testing to analyze the biological material. Forensic analysts found two male profiles and compared them with the samples taken from both defendants. On July 30, 2010, the lab issued a report on the evidence which conclusively excluded both Dupree and Massingill as possible sources of the DNA found on the victim’s pubic hair samples. According to the court record, both the robbery and the rape were part of a single, isolated incident committed by the same two perpetrators.

The District Attorney’s Office agreed that the DNA evidence established Dupree’s actual innocence and he was granted habeas corpus relief by the Texas Court of Criminal Appeals.  He and his longtime girlfriend married the day after his release.