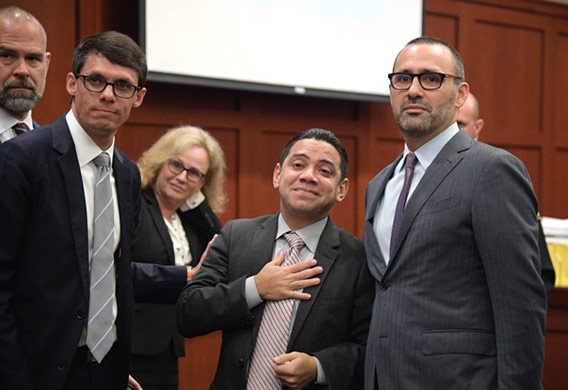 On the morning of June 17, 2004, 47-year-old Cheryl Williams and 68-year-old Carol Bareis were found stabbed to death in their home at 121 Vagabond Way in Altamonte Springs, Florida.

Mark Van Sandt called police shortly before 9 a.m. saying he discovered the bodies when he stopped to pick up clothes for his girlfriend, Samantha Williams, who was the daughter of Cheryl Williams and the granddaughter of Carol Bareis. Although Samantha lived with Cheryl and Bareis, Van Sandt said he and Samantha had spent the previous night at his home and that she had gone to work separately that morning.

Cheryl Williams had been stabbed or cut 129 times and bled to death. Her body was found blocking the front door. Bareis, who was partially paralyzed after suffering a stroke, was on the living room floor next to her wheelchair. She had been stabbed twice.

Police found a bloody 10-inch kitchen knife between the residence and the house next door at 117 Vagabond Way. Samantha, who had come to the scene, then said she had a strong suspicion—a “gut feeling”—that the attacker was 24-year-old Clemente Aguirre-Jarquin, who lived with two roommates at 117 Vagabond Way.

Aguirre-Jarquin worked at a restaurant where he washed dishes and prepped food. He had entered illegally into the U.S. after fleeing from his native Honduras when narcotics traffickers tried to force him to become a member of their gang.

At 11 a.m., Seminole County Sheriff’s deputies went to the residence. Aguirre-Jarquin and his two roommates said they knew nothing.

However, later that day, Aguirre-Jarquin went to the police and said he had been drinking during the night and ran out of beer. Because the store would not open for another hour, he said, he went next door to ask for beer. He said he went through the front door, which was never locked, and saw that Cheryl was dead. He was arrested for tampering with evidence from a crime scene.

The bloody knife police found resembled the knives used at the restaurant where Aguirre-Jarquin worked. The head chef told police that one of the restaurant’s 10-inch chef’s knives was missing.

On June 25, 2004, Aguirre-Jarquin was indicted on charges of first-degree murder and burglary. He went to trial in Seminole County Circuit Court in February 2006.

Law enforcement officers, physicians, and crime lab analysts testified about the evidence at the crime scene and the victims’ wounds. Cheryl had severe wounds to her lungs and leg, one of which severed her femoral artery. She was stabbed in the arms, legs, back, hands, feet, and chest. One stab wound to her left lung was considered the fatal wound. She also had numerous defensive wounds on her hands and feet that suggested an extremely violent struggle. Bareis died from a stab wound that severed her left ventricle. She also had been stabbed in the back.

According to the testimony, the stab wounds were consistent with being caused by the chef’s knife found between the victims’ residence and Aguirre’s home. The knife had Cheryl’s blood on the handle and Bareis’s blood on the blade. An analyst testified that this indicated that Cheryl was killed first.

A bloodstain pattern analyst testified for the prosecution that Aguirre-Jarquin’s shorts had contact stains on the front and back. The back of his shorts also had bloodstains that were the result of blood spatter, which the analyst said indicated that blood was sprayed during commission of the crime. The analyst said Aguirre-Jarquin’s socks also had bloodstains that were “consistent with dropped blood.”

Samantha Williams testified that Aguirre-Jarquin had previously been a guest in their home, but was banned from the house several months earlier after she awoke during the night to find him hovering over her bed. She told the jury she had spent the night of the murders with Van Sandt. Van Sandt also testified that Samantha spent the night with him. Aguirre-Jarquin testified that he had the day before the murders off from work. He said he and his friends drank throughout the day and into the night, and that he returned to his home at 5 a.m. Because he was out of beer, he said, he walked next door. He then discovered Cheryl’s body.

When there was no reply, he said, he went to Samantha’s room. She was not there, but her room had been ransacked. Aguirre-Jarquin said he ran home, tossing the knife into the grass. He stripped off his clothes, put them in a plastic bag, and then washed himself. Aguirre-Jarquin said he did not call police because he was an illegal immigrant and was afraid of being deported. On February 28, 2006, the jury convicted him of first-degree murder and burglary. Two weeks later, during the punishment phase of the trial, Aguirre-Jarquin at one point rose from his seat and yelled, “They’re trying to kill me for no reason. I didn’t do it. I didn’t kill nobody.”

In 2007, the work of the fingerprint analyst, Donna Birks, came under review after a co-worker reported that Birks had made a positive identification of a print that was impossible to read. The review determined that Birks was wrong when she said she identified Aguirre-Jarquin’s print on the knife. In fact, the print was not suitable for comparison.

Aguirre-Jarquin filed a motion for a new trial based on the disclosure, but it was denied. In 2009, the Florida Supreme Court upheld Aguirre-Jarquin’s convictions and death sentence.

In 2011, Aguirre-Jarquin’s attorneys at the Capital Collateral Regional Counsel’s office asked the Innocence Project for help in seeking DNA testing of more than 80 pieces of evidence.

The results of the tests were presented at an evidentiary hearing in 2013. Aguirre-Jarquin was excluded as the source of the DNA at the scene, and Samantha’s DNA was found in eight locations that the defense contended were consistent with her being the attacker.

In addition, Aguirre-Jarquin’s legal team presented evidence that Samantha had a history of mental illness and had been taken to the hospital about 60 times for psychiatric evaluations. On one occasion, while being transported by police, she was recorded saying that her mother and grandmother had “died for me.”

Samantha testified and denied being the killer. She acknowledged having a violent temper, and that she had been treated for mental illness. She further admitted that on the night before the murders, she had argued with her mother.

Van Sandt testified that although he and Samantha went to bed at his home on the night of the murders, he was “dead to the world” and could not say that she didn’t leave during the night.

In addition, a crime scene expert testified that what was said to be blood spatter on Aguirre-Jarquin’s clothing was actually blood that had transferred when he picked up the victims.

However, in August 2013, Circuit Judge Jessica Recksiedler denied the motion for a new trial. She ruled that the evidence would not have convinced a jury to acquit Aguirre-Jarquin.

While the appeal of the denial of the motion for a new trial was pending, the case was remanded to allow the defense lawyers to present additional evidence that Samantha had confessed. Four people testified that Samantha had admitted she killed her mother and grandmother. Samantha’s friend, Nichole Casey, testified that on two occasions in 2010, Samantha admitted to the murders. Casey said that Samantha was crying and making “a stabbing motion toward her chest.” Casey said Samantha told her “that the demons had made her do it.”

Three of Samantha’s former neighbors testified to three separate instances in which Samantha admitted to the murders. Christine Laravuso testified that in March 2012 at a neighborhood barbeque, Samantha said, “I’m crazy, I’m evil, and I killed my grandmother and my mother.”

Two other neighbors, Marianne Laravuso and Michael Bowman, testified that in July 2012, after they asked her to leave their property, Samantha said that she “wasn’t afraid” of them and that she had “killed [her] mom and grandma.” A few months later, Marianne saw Samantha standing in her yard and asked her to leave. Marianne testified that Samantha replied, “I’m not afraid of you guys . . . I killed my mom, I killed my grandmother.”

Judge Recksiedler again denied the motion for a new trial.

In October 2016, the Florida Supreme Court reversed the denial of a new trial, vacated Aguirre-Jarquin’s convictions and death sentence, and ordered a new trial.

The court ruled that “adding the newly discovered evidence to the picture changes the focus entirely: No longer is (Aguirre-Jarquin) the creepy figure who appears over Samantha’s bed in the middle of the night; he is now the scapegoat for her crimes….And when the DNA evidence is considered together with Samantha’s numerous, unequivocal confessions, the result is reasonable doubt as to (Aguirre-Jarquin’s) culpability.”

In March 2018, during jury selection for a retrial, Judge Recksiedler declared a mistrial after jurors were heard talking about searching the Internet for information about the case.

Not long after, Judge Recksiedler agreed to remove herself from the case. The defense had alleged that she had a personal stake in obtaining a second conviction of Aguirre-Jarquin to show that her decision not to grant Aguirre a new trial was correct. Recksiedler, the defense argued, “had tried to leverage this case for her own gain by touting her denial of post-conviction relief in her application for a position on the District Court of Appeal, even while the appeal of that decision remained pending before the Florida Supreme Court.”

Jury selection for a second trial began again in October 2018. On October 29, the defense revealed a sworn affidavit from Van Sandt’s current wife, Nicole Bouzigard, contradicting Van Sandt’s testimony at Aguirre-Jarquin’s 2006 trial that Samantha was with him all night. In the affidavit, Bouzigard said Van Sandt told her that Samantha woke him during the night and said she “had a bad feeling about her mother.” Van Sandt said he offered to drive her home, but she declined, saying she would get a taxi and that he should come to the house in the morning to pick up a load of laundry. Bouzigard said Van Sandt told her that Samantha left on the night of the murders by crawling out of his bedroom window.

On November 5, 2018, with jury selection still in progress, the prosecution abruptly dismissed the charges. Seminole County State’s Attorney Phil Archer issued a statement that the decision was “based upon new evidence that materially affects the credibility of a critical State witness.”

Aguirre-Jarquin was released on a federal immigration court bond after the U.S. Department of Homeland Security placed an immigration hold on him. His lawyers filed a claim for asylum.

In January 2019, his lawyers filed a petition in Seminole County asking a judge to declare him a wrongly convicted person, a step in the process to seek compenation from the state of Florida. In May 2019, a judge dismissed the petition as filed too late. Lawyers for Aguirre-Jarquin said they would appeal.