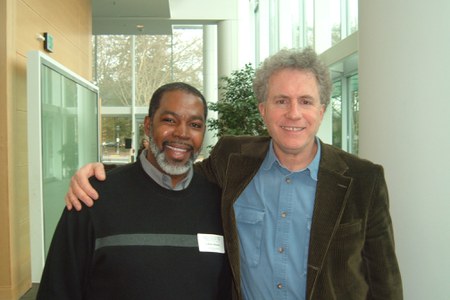 A judge ordered a new trial for Johnson on June 15, 1999, after meeting with prosecutors and defense attorneys. The District Attorney decided to drop the charges against Johnson after looking at the DNA test results. Johnson served 16 years of his sentence.

On March 9, 1983, a woman in College Park, Georgia, was raped and sodomized in her home. Her attacker choked her from behind with a belt and, after raping her, led her around her apartment. He stole around thirty dollars and left. The victim described her attacker as African American. Two evenings earlier, another woman in the same area had been raped in a similar manner. One of the victims identified Johnson out of a photo array but later failed to identify him in a line-up, while the other victim identified him in the line-up but not the photo array. Johnson was convicted of one of the rapes and sentenced on November 7, 1983, to life in prison. He was acquitted of the other rape several months later, though evidence of his first conviction was presented at the second trial.

The prosecution centered its case around the identification of Johnson by the victims and by other women in the area who had run-ins with a similar looking intruder in the same time period. Both victims identified Johnson in a preliminary hearing. An army camouflage jacket and a green sweater with light stripes on the sleeves found in Johnson’s home were consistent with descriptions of the attacker.

A lab analyst also testified improperly at trial when she suggested that 36% of the male population could be excluded as potential contributors of the semen found on the vaginal swab collected from the victim after the crime. Serology testing showed that the victim and the perpetrator shared the same blood group markers. When the evidence being tested is a mixed stain of semen from the perpetrator and vaginal secretions from the victim – and testing does not detect blood group substance or enzymes foreign to the victim – no potential semen donor can be excluded because the victim’s blood group markers could be “masking” the perpetrator’s. Under such circumstances, the failure to inform the jury that 100% of the male population could be included and that none can be excluded is highly misleading.

Johnson made a motion for a new trial that was denied on September 10, 1984. His conviction was affirmed in 1989. On April 26, 1994, Johnson made an Extraordinary Motion for a New Trial in order to obtain the rape kit so that DNA testing could be conducted. His case had been taken on by the Innocence Project.

On November 11, 1997, LabCorp analyzed the non-sperm fraction of samples it received. This testing appeared not to be relevant to establishing the identity of the perpetrator. Forensic Science Associates conducted PCR based DNA testing on the vaginal swab and cervical slides from the rape kit and issued a report that concluded that Johnson was not the source of the sperm found on the vaginal slide.

A judge ordered a new trial for Johnson on June 15, 1999, after meeting with prosecutors and defense attorneys. The District Attorney decided to drop the charges against Johnson after looking at the DNA test results. Johnson served 16 years of his sentence.

Calvin Johnson was a member of the inaugural board of directors for the Innocence Project. He also serves on the board of the Georgia Innocence Project. In September 2003, his book Exit To Freedom was published by the University of Georgia Press. Co-authored by Dr. Greg Hampikian, the book chronicles Johnson’s wrongful arrest, conviction, imprisonment, and the events that led to his exoneration.