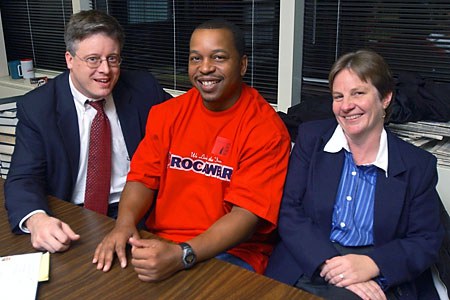 In November 2002, Bernard Webster was exonerated and released from prison after being incarcerated for twenty years. Webster was convicted of rape and burglary in 1983 and sentenced to thirty years in prison.

In July 1982, the victim returned to her Towson, Maryland, apartment in the middle of the afternoon. She entered her bedroom and was attacked by a man who jumped out of her closet. The assailant covered her head and placed an object at her back. He threatened to shoot her and then raped her. The victim’s husband arrived at the apartment soon after the perpetrator fled and contacted the police.

The victim, who is white, described her attacker as a black male, dark complexion, and close cropped hair. After searching their bedroom, the victim and her husband found a pair of khaki pants that were left by the perpetrator. They also found a pipe and a keys similar to their apartment keys in the pockets. These items, as well as the victim’s clothing, were collected by the police. The victim was transported to the hospital, where a rape kit was collected.

Three other witnesses at the apartment complex had seen a man resembling the description of the attacker that day. Two of the witnesses described the man they saw as a young black man, 5’8″, wearing tan/beige pants, light skinned. All three witnesses picked Webster’s photograph from a photo lineup, though one witness also chose another photo that resembled the man he saw.

Bernard Webster was arrested based on these identifications. He was eighteen at the time, 5′ tall. He was placed into a lineup and identified by the victim and two of the three eyewitnesses. Webster asserted that he was in no way involved in the crime.

At trial, the prosecution presented evidence that semen was found on the bedspread on which the crime occurred. ABO typing results indicated type AB. Webster is type A, the victim type B, and her husband type O. She also testified that she found type A and type B antigens in the vaginal washings from the rape kit, though her report stated type AB, a discrepancy attirbuted to typographical error. The forensic scientist went on to testify that the contributor or the semen was a type A secretor, like Webster. The forensic testimony stood, though there is no scientific way to distinguish, in a mixed stain, whether the contributor of the semen was a type A or type AB secretor. The scientist’s testimony was misleading and designed to aid the prosecution’s case.

Webster presented an alibi defense, producing two witnesses who testified that they were with Webster at a basketball court at the time of the crime. Based, however, on the identifications and the forensic testimony, Webster was convicted in March 1983 and sentenced to thirty years in prison.

The Office of the Public Defender became involved in Webster’s case in 2000. In 2001, they filed under the new Maryland postconviction DNA testing statute. After a year of litigation, a judge ordered testing on three slides located at the hospital where the victim was treated. In October 2002, results came back indicating that Webster was excluded as the source of spermatozoa found on the slides. Prosecutors decided to conduct their own DNA testing at the police laboratory with new reference samples from the victim and her husband. Those results excluded both the victim’s husband and Webster as the source of spermatozoa.

In November 2002, the prosecution agreed to vacate Webster’s conviction. He became the first person to be exonerated under Maryland’s postconviction DNA statute. Bernard Webster was forty years old when he left prison. He had served twenty years for a crime he did not commit.