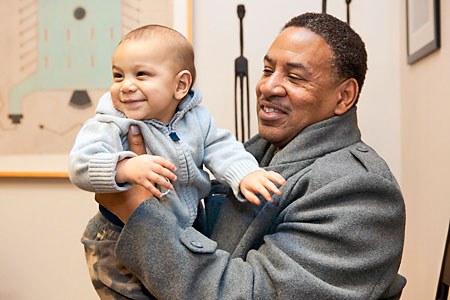 Bennie Starks, one of the Innocence Project’s longest active clients, was fully exonerated and cleared of all charges on January 7, 2013 after a 25-year battle to clear his name of a rape and battery he didn’t commit. Starks, who was convicted based in part on eyewitness misidentification and erroneous bite mark analysis, spent 20 years’ in prison and six years after his release facing the threat of a retrial.

On the evening of January 18, 1986, a 69-year-old Hispanic woman went for a walk when she was accosted by an assailant. She was grabbed from behind, beaten and dragged into a nearby ravine where she was bitten and raped. Initially, the victim denied the rape, but later told a nurse that it had occurred and a rape kit was taken.

The victim described her assailant as an 18-year-old, clean-shaven black male. Although initially only slippers were found in the ravine, a subsequent search of the crime scene the next day discovered a black coat, watch, scarf and gloves. Linking Starks to the crime was a dry cleaning slip that was found inside the coat. Yet Starks did not match the description. He was 26 years old and had facial hair. Furthermore, Starks stated that he had been at two bars that evening, and witnesses confirmed his presence with the exception of one 20 minute period. Starks said he had been mugged on the way home at around 11 p.m., and that his coat, watch, and gloves were stolen, which would explain their presence at the ravine.

During the trial, a serologist testified that Starks could not be excluded as the source of semen found on the vaginal swab and the victim’s underwear, disclosing that approximately 14% of the population shared his blood type. Additionally, she testified that the hairs recovered from the scarf found in the ravine could have come from Starks (although the victim did not claim that her attacker was wearing a scarf, and Starks did not claim to have lost one).

A forensic odontologist testified in court after comparing the bite marks found on the victim’s shoulder with Starks’ teeth. The expert concluded with a reasonable degree of dental and odontological certainty, that it was undoubtedly Starks who had bitten the victim. A second forensic odontologist, who worked with the first, testified to the same findings. Bite mark analysis has never been scientifically validated and has proven to be unreliable.

Finally, the victim identified Starks at trial as her attacker.

The Post-Conviction Appeals and Exoneration

In 1996, after Starks’ appeal was denied, he contacted the Innocence Project, which requested DNA testing. In 2000, FSA (Forensic Science Associates) issued a report stating that STR-DNA testing on the victim’s underwear excluded Starks, implicating another male. Insisting that the exclusion was not probative, prosecutors maintained that Starks had been the victim’s attacker and opposed entering the new DNA profile into a DNA database.

It was also discovered that the serologist’s testimony at trial had been false, and that Starks should have been excluded based on his blood type alone. Starks requested a new trial, but he was denied.

In 2004, after finding a vaginal swab from the rape kit that was believed to no longer exist, the Innocence Project secured additional DNA testing of the vaginal swab from the victim’s rape kit and discovered that the DNA came from the same person previously implicated. Starks was again excluded. In 2006, the Illinois Appellate Court for the Second District overturned Stark’s conviction, and he was released on bond. Nevertheless, Lake County prosecutors refused to drop the charges, inventing increasingly outlandish theories to explain the DNA exclusion and continued to threaten to retry the case.

Finally, in May 2012, the rape charges were dropped, but not the battery charge. Though the victim had said that only one man attacked her, prosecutors now theorized that Starks beat her, even if he had not raped her, arguing that the semen could have come from an act of consensual sex even though the victim denied having sex in the two weeks prior to her attack. On January 7, 2013, the newly elected State’s Attorney Mike Nerheim agreed to dismiss the remaining battery charge, and Starks was exonerated at the age 53.