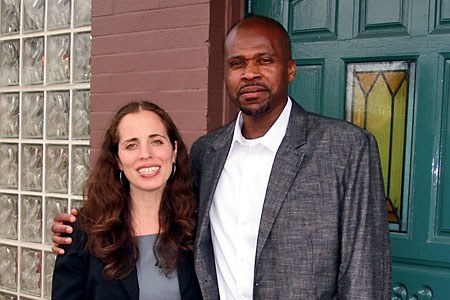 After serving more than 10 years in Missouri prisons for a carjacking he didn’t commit, DNA tests on blood stains at the crime scene proved Antonio Beaver’s innocence and he was exonerated in 2007.

On August 15, 1996, a 26-year-old white woman drove into a St. Louis parking lot planning to park her car and return to work. She approached a man in the lot, thinking he was the parking attendant. The man told her that she had to move her car immediately or it would be towed, and he followed her back to the car. As she got in the car to leave, the man told her she could stay. As she got back out, the man attacked her with a screwdriver and told her to give him the keys and her purse. She struggled with him and then decided to flee; she threw her purse on the seat and jumped out of the car. As she was exiting the car, she noticed that the man was bleeding and that there was blood inside the driver’s side door. She ran into a nearby parking garage and called the police.

The victim described her attacker to police as a clean-shaven African-American man wearing a baseball cap. She said the man was 5’10’’ tall, with a “David-Letterman-like” gap between his teeth. The next day, the victim helped police draw a composite sketch of the attacker and police recovered the victim’s car in East St. Louis. Latent fingerprints and swabs of the blood stain inside the driver’s side door were collected.

Six days later, a detective arrested Antonio Beaver because he thought Beaver resembled the composite sketch in this case. However, Beaver had a full mustache, was 6’2’’ tall and had chipped teeth. The same detective then prepared a live lineup including Beaver and three other men – two of them police officers. Beaver and the other non-officer were the only two to wear baseball caps, and Beaver was the only one with noticeable defects to his teeth. The victim identified Beaver.

Beaver was charged with first-degree robbery and tried in April 1997. The victim testified that Beaver was the man who attacked her, the prosecution argued that the victim’s clear memory of the crime meant that she was better able to identify the perpetrator. The defense presented evidence showing that fingerprints collected from the victim’s car – including prints from the driver’s side and the rearview mirror – did not match the victim or Beaver. They argued that prints left on the rearview mirror indicated that the person who left them must have driven the car.

After several hours of deliberations over two days, the jury convicted Beaver of first-degree robbery. He was sentenced to 18 years in prison.

The Biological Evidence and Exoneration

In 2001, Beaver filed a motion on his own behalf requesting DNA testing. The state opposed the motion, but the court granted a hearing on the issue in 2005. The Innocence Project accepted Beaver’s case and filed another brief on his behalf in 2006. The state agreed to testing on the blood swab from inside the car door in October 2006 and the results proved that Beaver could not have committed this crime. The DNA testing not only excluded Beaver as the source of the blood, but led to the identification of another man already incarcerated for other crimes. Beaver was exonerated on March 29, 2007. He was 41 years old at the time of his exoneration and had served more than a decade in prison.