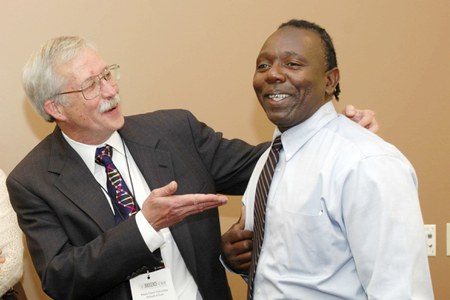 On January 23, 2006, Alan Crotzer was freed from prison after post-conviction DNA testing proved his innocence of a 1981 rape, kidnapping, and robbery. Crotzer had spent 24 years in prison in Florida for this crime - more than half his life. Crotzer and two co-defendants, Douglas James and Corlenzo James, were convicted of these crimes in 1981.

The Crime
On July 8, 1981, three men forced their way into a Tampa, Florida, home. One of the assailants was armed with a shotgun. The five people inside the home were threatened with the gun and robbed. Two of the victims, a 38-year-old woman and a 12-year-old girl were taken from the home and forced to get into the trunk of the assailants’ car. They were driven to a dark, wooded area.

The victims were removed from the trunk. One of the assailants forced the adult female victim to the front of the car, where she was raped orally and vaginally. According to her testimony, this assailant did not ejaculate. A second assailant took the 12-year-old victim to the back of the car and raped her. This second assailant then raped the adult victim as well. She testified that this assailant did ejaculate. According to both victims, the third assailant remained in the car the entire time and did not participate in the rapes. Both victims were left tied to trees. They were able to free themselves, went to a nearby house, and contacted the police. Both rape victims were taken to a hospital, where rape kits were collected.

The robbery victims left in the home managed to untie themselves. Two of them were able to record the license plate number of the Buick that the assailants were driving. They attempted to follow the car but lost sight of it. They then contacted the police.

The next day, the victims were shown more photographs. This time, the array also included the picture of Douglas James’ brother, Corlenzo. Three of the victims, including both rape victims, identified Corlenzo James as the third assailant.

The Biological Evidence
The Florida Department of Law Enforcement (FDLE) tested samples from the rape kits collected. Semen was identified on the adult rape victim’s vaginal swabs, underwear, and clothing.  A lab analyst testified at trial that the blood group markers of semen from the crime scene matched the markers of both Crotzer and the victim. When the evidence being tested is a mixed stain of semen from the perpetrator and vaginal secretions from the victim – and testing does not detect blood group substance or enzymes foreign to the victim – no potential semen donor can be excluded because the victim’s blood group markers could be “masking” the perpetrator’s. Under such circumstances, the failure to inform the jury that 100% of the male population could be included and that no one can be excluded is highly misleading.

An FDLE analyst also testified that two hairs recovered from the adult victim’s rape kit could have come from Alan Crotzer and Corlenzo James, respectively. Because there is not adequate empirical data on the frequency of various class characteristics in human hair, an analyst’s assertion that hairs are consistent or similar is inherently prejudicial and lacks probative value.

The Trial
Corlenzo James pled guilty to robbery and burglary charges. Douglas James and Alan Crotzer were tried together. Crotzer tried to have his trial severed from that of Douglas James, who was representing himself, but was unsuccessful. Douglas James pursued a consent defense with regard to the adult rape victim while Crotzer continued to claim that he was never there, never participated in any of the crimes, and had no knowledge of the crimes.

All five victims made in-court identifications of Crotzer. He was specifically identified as the perpetrator who wielded the shotgun and raped both victims.

Crotzer testified that he had been with his girlfriend on the night of the crime. They were with a friend and then with various members of his girlfriend’s family that night.

Post-Conviction
Crotzer continued to proclaim his innocence. It was not until 2003, however, that he was able to secure access to the evidence from his trial, which was being preserved at an FDLE laboratory. The spermatozoa found on the evidence, consisting of six slides, was subjected to three rounds of DNA testing at three different laboratories. Prosecutors agreed that the evidence should be tested.

The last round of testing, performed at Forensic Science Associates, confirmed what Crotzer had claimed since his arrest: he could not have been the man that raped the victims. Specifically, the spermatozoa found on a slide recovered from the rape kit of the adult female rape victim came from an unknown male. It could not have come from Crotzer, either of the James brothers, or the victim’s husband.

Further, Douglas James has confirmed that he and his brother committed the crime with a childhood friend, not with Crotzer. James and Crotzer did not even know each other prior to the 1982 trial.

On January 23, 2006, Alan J. Crotzer’s conviction was overturned and he was released. He walked out of the courthouse with members of his family and legal team, David Menschel, Sam Roberts, Martin McClain, and Jenny Greenberg of the Florida Innocence Initiative. Crotzer had spent 24 years in prison for a crime he did not commit.