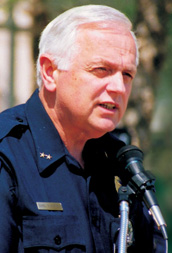 
In recognition of Black History Month in February, the Innocence Blog will feature a nearly month-long series that will examine the intersection of the nation’s evolving criminal justice system, especially around wrongful convictions, and the lives of black people in 21st Century America. The series will feature personal and professional stories and perspectives by legal and law enforcement experts, as well as people at the forefront of changing post-conviction laws for the wrongfully convicted in the United States. Please visit the Innocence Blog this month to read guest posts from all the contributing authors.


Darrel Stephens, a veteran police executive with more than 40 years of experience, is the executive director of the Major Cities Chiefs Association and is on the Innocence Project’s Board of Directors. Also a member of the faculty of the Public Safety Leadership Program in the School of Education at Johns Hopkins University, Chief Stephens is an expert in innovative and progressive policing practices.


It’s no secret: conventional policing in the United States has historically been divisive in nature. As a veteran member of law enforcement, I’ve seen that “hot-spot” tactics, such as stop, question and frisk, create an antagonistic dynamic. They place police officers at odds with the communities they’re sworn to serve and reinforce the perception that officers are not committed to protecting all people equally. One need look only as far as Ferguson and Staten Island to see how grave the consequences can be when public trust of the police breaks down. But constructive policing strategies that reduce crime through fostering strong ties between local police and citizens do exist and their effectiveness is proven.


I got my start in law enforcement in Kansas City, Missouri, back in 1968. At the time, good policing was based on a three-prong approach: random patrol, rapid response and retrospective investigations. But a lot has changed over the years. Conventional wisdom around what constitutes effective policing has been challenged and, in some cases, proven wrong. Research has taught us that police agencies are more successful at preventing crime and improving legitimacy when they adopt community and problem oriented policing strategies. These approaches partner regularly assigned patrol officers with neighborhoods in addressing local safety concerns and foster mutual trust.

Distinct from an emphasis on aggressive patrol tactics in targeted areas, community and problem oriented policing are built upon a framework of collaboration between the police and stakeholders. A better balance of power is established as the various parties work together to identify ways to address neighborhood crime and disorder problems. Concerned citizens share the responsibility with police and are actively involved in keeping their neighborhoods safe. Patrol officers and their departments are incorporated into neighborhoods as advocates in helping communities to meet their security goals.

When crime does happen, investigations are better informed. Community members know patrol officers well enough to entrust them with important tips and details pertinent to solving cases. And when patrol officers have stronger relationships with the community and a problem focus, their investigations are more thoughtful. Tunnel vision is diminished as officers consider all of the details of a case and crimes are solved based on the strongest evidence.

Charlotte, North Carolina; Sacramento, California; Austin, Texas; Cincinnati, Ohio and Philadelphia, Pennsylvania are only a few places across the country where law enforcement agencies have successfully incorporated community policing and problem solving models. The people who are a part of these community policing efforts voice greater satisfaction with their local law enforcement.

It was disheartening this summer to watch the tragic events unfold in Missouri, the place where I started my career as a young police officer in 1968. One would hope that the relationships between the police and the communities they serve would be strong enough to come together in times of crisis rather than move further apart. My hope, though, is that the police will learn from Ferguson and Staten Island and redouble efforts to ensure officers treat all people they encounter with dignity and respect. Otherwise, we risk a continuation of strife between our communities and the police.