Bennie Starks Exonerated After 25 Year Struggle to Clear His Name 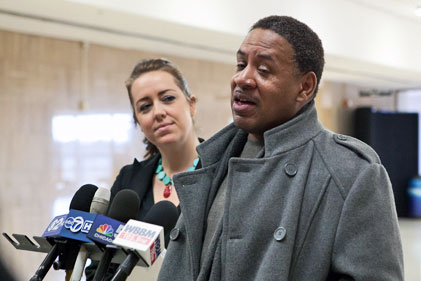 
Innocence Project client Bennie Starks walked out of a Lake County, Illinois, courthouse today a free man, ending a 25-year struggle to clear his name, including multiple rounds of DNA testing and three separate appeals. Newly elected State’s Attorney Mike Nerheim agreed to dismiss the remaining charges pending against Starks from a 1986 rape and battery. Though DNA testing from as early as 2000 excluded Starks as the perpetrator, former Lake County prosecutors repeatedly refused to acknowledge the results, coming up with improbable theories to deny Starks’ innocence.

Starks’ exoneration comes one month after a court date last month was rescheduled due to a legal technicality. The


“I don’t even have any words. I am overwhelmed with joy. It’s finally over,” Bennie Starks said outside the Lake County courthouse this morning, minutes after all the details of dropping the case had been ironed out.