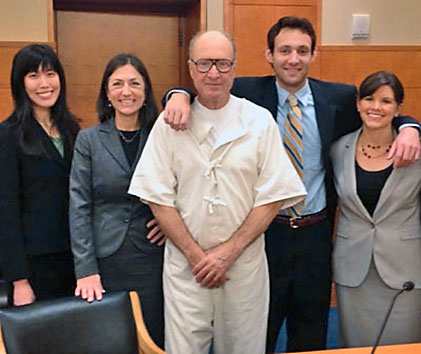 The wrongful conviction of

client George Souliotes was overturned Friday when a federal judge ruled he had received ineffective assistance of counsel at trial.

Now 72, Souliotes was convicted of setting fire to a rental property he owned that burned to the ground and killed five people in January 1997. He received a life sentence and has spent the past 16 years behind bars.

The conviction was based largely on two pieces of forensic science that have since been discredited as fire science has advanced. Indicators, like crazed glass, once believed to be evidence of arson have since been shown to appear in accidental fires as well. Also, the chemical compound known as a medium petroleum distillate (MPD) was found at the fire scene and on Souliotes’ shoes and was once believed to only exist in ignitable liquids. It has since been proven to exist in many household products and consumer goods, including the solvents in glues and adhesives used in floor coverings and footwear.

After Souliotes’ first trial resulted in a hung jury, his attorney at the second trial failed to present an adequate defense by never rebutting the prosecution’s evidence or calling any of the witnesses who previously established a lack of motive at the first trial.

Friday’s ruling also ordered Souliotes’ release, and although a date hasn’t been specified yet, his attorney expects it to be within 30 days. This is the NCIP’s third exoneration of 2013 and its 17th victory since its creation in 2001.


Read more from the